Pedal Express was founded in Berkeley, California in 1994 by a small group of environmental activists. The early years were spent focused on the potential of cargo bikes to haul heavy loads, often weighing in excess of several hundred pounds.

As the notoriety of Pedal Express grew, so too did their service area, quickly expanding beyond Berkeley, and into neighboring Oakland and Emeryville. Over time, Pedal Express has transformed into a more traditional bicycle courier company, emphasizing speed and efficiency using a variety of bicycle types.

From the beginning, Pedal Express has been a worker-owned cooperative. There are no bosses and all business decisions are reached by consensus. This non-hierarchical model has provided riders with a unique opportunity to own and operate a business. The result is a vibrant, communal organization that has been influenced by dozens of people over the past twenty years.

Throughout it all, Pedal Express remains committed to its core values. The business is rooted in the belief that the bicycle is a tool to help achieve positive environmental and social change. 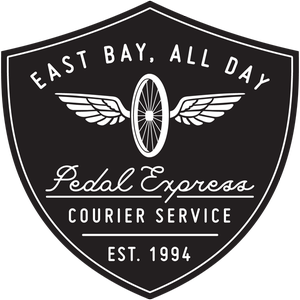