Marguerite "Peggy" Stinnett (January 1, 1922 – June 2, 2009) was a long-time Oakland journalist. Her 50+ year career included writing for The San Jose Mercury, The Montclarion, the Oakland Tribune, and being an associate editor, editorial page editor and later columnist for the Tribune. She also worked as a TV reporter for KTVU and KQED, taught journalism at UC Berkeley, and served on the Oakland Board of Education for three terms. Stinnett retired from the Tribune in 2006, but returned to journalism to write a weekly guest column for the Oakland Post in 2007.

Peggy McBride Stinnett was married to Robert Stinnett (who also worked for the Tribune as a photojournalist, and served with George H.W. Bush during WWII), and they had two children, Colleen and Jim. She was related (via her mother, Marguerite Hearne McBride) to the Peralta family. 1

When she died, the California Senate adjourned in her memory. Services were held at Our Lady of Lourdes Catholic Church, and her remains interred at Saint Mary's Cemetery. 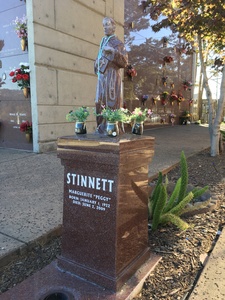