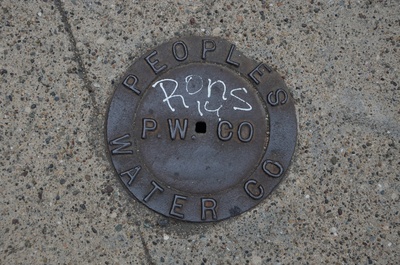 CC SA-BY Our OaklandThe People's Water Company was formed in 1906. In 1907 People's absorbed the Contra Costa Water Company, the Syndicate Water Company, and Richmond Water Company, becoming the largest water company in the East Bay serving customers from Richmond to south Oakland. They went bankrupt during in 1914 during a serious drought.

In a 1909 reorganization, H. C. Capwell, Harry Leimert, Wickham Havens and others were elected directors. 1

"East Bay Water Company, Oakland, Cal.  Organized under the laws of California Nov. 13, 1916. This Company is a successor in interest to the old Peoples Water Co., the property of which was sold on November 29, 1916 to the Reorganization Committee of the Peoples Water Co., which later conveyed it to the East Bay Water Co. The following is a summary of what each class of security received under the reorganization."  2