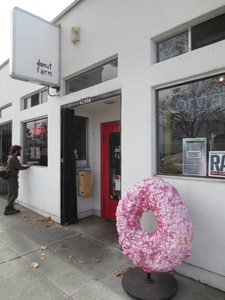 Pepples Donut Farm
photo from Our OaklandPepples Donut Farm is a restaurant in the Golden Gate business district of North Oakland that is predominantly known for a vast array of vegan cake donuts that are served during the week, and distributed to many locations throughout Oakland, Berkeley, and San Francisco.  Even though the regular cake donuts are good, Pepples also makes fantastic old fashioned yeast raised donuts that are ONLY served at the Donut Farm during the weekends (usually after 11am Saturday and Sunday).

In addition to donuts, Pepples serves a vast array of vegan fare for lunch (weekdays) and brunch (weekends & weekdays).  Sample fare includes waffles, pancakes, tofu scramble, hashbrowns, biscuits and gravy, tempeh bacon, and veggie burgers. At no extra cost, weekday entrees can also be made "salad style," meaning the ingredients are served without a bun or bread and on top of a large portion of salad greens instead.

It is worth noting that in addition to being fully vegan, Pepples sources only local and organic ingredients.

The local Whole Foods Market stocks vegan donuts from the Posh Bakery in Santa Clara, NOT from Pepples.

If Pepples is packed for weekend brunch, another vegan alternative is Timeless.

Pepples was the recipient of the East Bay Express write-in category of Cutest Wait Staff Readers' Poll Award in 2014. 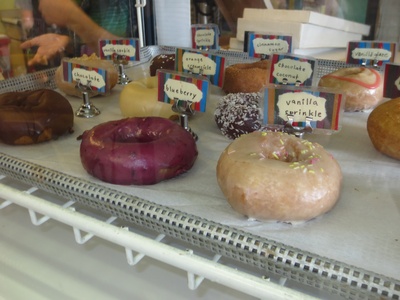 mmm...donuts
photo from Our Oakland