The ferryboat Peralta was built in 1926 for the Key System. The 256' double-ended vessel and her sister ship, the Yerba Buena, were powered by turbo-electric steam turbines. At the time, she was considered the fastest and one of the most luxurious ferries on the bay, but she had a difficult history. Later she was rebuilt into the ferryboat Kalakala which served on Puget Sound in Washington.

The ship was constructed by the Moore Dry Dock Company in 1926 at a cost of $900,000, and her troubles started early. The hull got stuck on the ways when being launched, which many sailors considered a jinx. The ship went into service in March 15, 1927. Within a month, she'd slammed into the docks in San Francisco, severing phone lines and causing $35,000 worth of damage.

The Peralta had a unique trim system of ballast tanks. As ferries approached their destinations, passengers tended to crowd to the front, pushing the bow down. The Peralta had ballast tanks fore and aft which could be filled or emptied to counteract the weight, keeping the ship on an even keel. On February 17, 1928, as the ship was approaching Oakland, passengers crowded to the front as usual, but the bow was abnormally low. It hit a wave trough, sending 5 feet of water across the deck. Thirty people were washed overboard, and five drowned. An inquiry cleared the crew of any wrong-doing (such as filling the wrong ballast tank), indicating the problem was an unusually large wake from another ship, but the trim system was never used again. 1 A woman and her daughter tried to defraud the Key System by claiming the daughter had died in the accident. She was later found working in a roadhouse near Martinez. 3

Then on May 6, 1933, the Peralta was tied up to the Key System Mole in Oakland for the night. A fire, likely started by an arsonist, broke out on the wooden pier and quickly spread. Three Key System employees grabbed $8,000 from the day's receipts and jumped onto the Peralta to try to escape, but her boilers were down. They cut the mooring lines, but the fire had already spread to the ship. As she drifted, the entire superstructure was engulfed in flames. The hull was still intact, but the rest was a twisted mass of metal, and the insurance company wrote off the ship.

Second life as the Kalakala 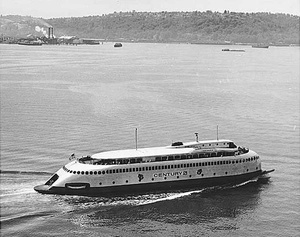 The hull was sold to Captain Alexander Peabody of the Puget Sound Navigation Company, and converted into the uniquely streamlined ferryboat Kalakala. She served on Puget Sound from 1935-1967, but her string of accidents continued. This was no doubt in part to the limited visibility afforded by the rounded portholes of her streamlined Art Deco-style superstructure.

The Kalakala was the first commercial vessel to receive radar after the technology was declassified, Raytheon license #001.2 In 1968, the ship was moved to Alaska where it was used as a floating crab processing plant. Eventually it was intentionally run aground and used as a fish processing plant. It was refloated in 1998 and towed back to Puget Sound. Plans for restoring the Kalakala stalled when they were unable to raise enough money. In early 2015, the Kalakala was scrapped. 4