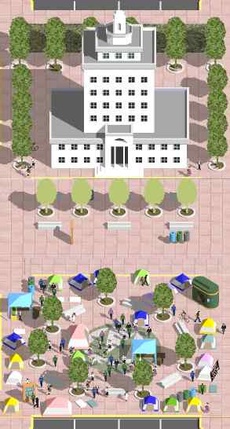 City Hall and Occupy Oakland at Frank Ogawa/Oscar Grant (ish) Plaza. With permission.PermaCities is a really ingenious online game that lets you transform Oakland (or Berkeley, or Davis, or Fremont, or Merced, or San Francisco) as you dream it, all while learning about different resources the city has to offer. The game consists of images reminiscent of the city: from City Hall  and Frank Ogawa/Oscar Grant Plaza (including Occupyers, which you can chose to keep or kick out--either way, you get a choice to click an external link to learn more about the movement), to run-down warehouses and "hipster ethnic enclaves". According to the creators, Alfred Twu, Benjamin Parisi, and Scotty Zeitgeist:

"PermaCities came from the idea of creating social media games like FarmVille that instead of just wasting your money, actually taught you how to farm or kept you up to date with the movement. A coworker of mine once commented on eco-utopian schemes and said, "Well, but what are they going to do about Los Angeles?" Permacities showcases things people are doing right now to upcycle existing environments into ecocities and ecovillages. The game was formerly known as Ecocity Now. We've changed the name to avoid confusion with other games and also to bring attention to permaculture principles of small scale interventions, working with nature, and focusing on both human and ecological needs." 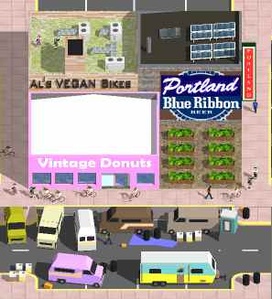 "Little Portland: An ethnic neighborhood for hipsters". With permission.Oh yeah, and they haven't even launched the whole game yet! If you're excited about this like your humble editor, check out and contribute to their upcoming kickstarter (updates via Facebook)!