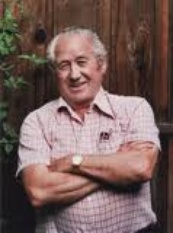 Peter Stackpole (1913 - 1997) was an original staff photographer for Life magazine, who chronicled the building of the Golden Gate Bridge, the invasion of Saipan, the glamour of Hollywood and life beneath the sea.

During his tenure at Life, 26 of Mr. Stackpole's pictures were on the magazine's cover, many of them shots of the Hollywood stars of the period. He told interviewers, though, that the stars were not his favorite part of the movie world. ''What I like about Hollywood is the sidelights and the extras, not the celebrities,'' he said.

Besides taking a series of pictures showing the construction of the Golden Gate Bridge and the San Francisco-Oakland Bay Bridge, Mr. Stackpole covered World War II in the South Pacific and efforts to bring electricity to rural America.

One of his specialties was chronicling the trends and fads that came out of California, from dance marathons to bathing beauties.

Mr. Stackpole won a George Polk Memorial Award for news photography in 1954 for a ''dramatic and unprecedented picture, taken 100 feet underwater,'' of a diver's attempt to set a new record for aqualung descent.

After leaving Life's staff, Mr. Stackpole taught photography at the Academy of Arts College in San Francisco. For 15 years, he wrote a column for U.S. Camera called ''35-mm. Techniques.''

A keen student of the mechanical aspects of photography, Mr. Stackpole long maintained a home workshop where he tinkered with camera gear and invented and built equipment for underwater photography.

In 1991, a fire at his home in Oakland, Calif., destroyed most of his negatives. Friends said Mr. Stackpole had less than 20 minutes to save what he could and managed to salvage only the work that established his career, showing the building of San Francisco's great bridges.

''I'd hate to think a glamorous picture of a movie star was all I'd ever done,'' he once told an interviewer. 1

Photographer Peter Stackpole (1913-1997), was the son of artists, Ralph Stackpole and Adele Barnes Stackpole. Educated in the San Francisco Bay area and Paris, Peter Stackpole grew up under the influence of his parent’s friends and peers, Dorthea Lange, Edward Weston and Diego Rivera. Maturing in this supportive artist community, Stackpole began developing his photographic style at a young age.

Stackpole’s appreciation for the hand-held camera and his developing technical expertise found a perfect subject in the construction of the San Francisco-Oakland Bay Bridge. With his Leica Model A, he captured the details of the work itself as well as the drama of the situation. Stackpole showed this work to Willard Van Dyke in 1934 and was soon thereafter included as an honorary member in Group f/64.

However, his photographic vision differed dramatically from the straight approach of the f/64 fine artists; Stackpole identified as a photojournalist preferring a vibrant and candid approach, and situating his subjects within a contextual setting. In 1935, twenty-five of Stackpole’s bridge photographs were exhibited at the San Francisco Museum of Art.

This led to several freelance projects and in 1936, when Henry Luce established his ground-breaking “picture” magazine LIFE, Stackpole was hired as one of the four staff photographers. Stackpole worked for LIFE from its founding until 1961, moving gracefully between photographing the glamorous and young in Hollywood, and the more routine lives of the laboring class, always endeavoring to present his subjects authentically.

Stackpole’s portraiture of Hollywood stars created approachable and endearing characters, and is recognized as a pioneering contribution to “media culture,” solidifying Hollywood icons as a subject of fascination within popular culture. Some of the celebrities he chronicled were Gary Cooper, Alfred Hitchcock, Vivien Leigh, Greer Garson, and Elizabeth Taylor.

Stackpole was LIFE’s chief Hollywood photographer from 1938 until 1951, when he moved east to work in the magazine’s New York office. Over the course of his career, 26 of his images graced the cover of LIFE. Stackpole’s work resulted in several book publications, including The Bridge Builders (1985), and Peter Stackpole, Life in Hollywood 1936-1952 (1991).

In 1987, the Los Angeles County Museum of Art included much of his work in their exhibition The Hollywood Photographers.

In his later years, Stackpole began an autobiography entitled Go Get ‘Em, Tiger, which remained unfinished at the time of his death in 1997. 2