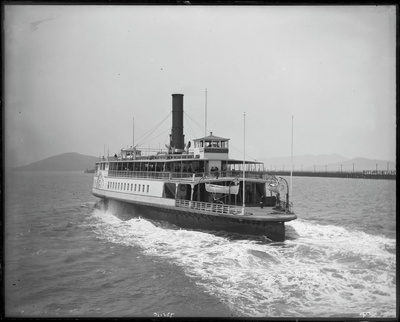 The ferryboat Piedmont was a ferry that ran between Oakland and San Francisco from 1883 to 1940 for the Southern Pacific Railroad's ferry service. It was a side-wheeler, with an unusual "beamless" beam engine design. The ferry was noted for its elegant interior. The Piedmont was the first ferry to arrive at the new Ferry Building in San Francisco on July 13, 1898. 1 In 1888, it was the first Southern Pacific ferryboat to be equipped with incandescent lights. 2,4

With the completion of the Bay Bridge in 1936, there was less need for the ferryboats. The Piedmont took a final, ceremonial voyage on January 14, 1939. 13 She was briefly put into service for the Key System carrying passengers to the exhibition on Treasure Island in 1939 and 1940.

The Piedmont was primarily a passenger ferry, but sometimes wagons and later automobiles were carried on the fore or aft decks. 17,18

With a career of almost 60 years on the busy and sometimes foggy waters of the bay, the Piedmont had its share of collisions, near misses, and other adventures.

In 1884, the tug Wizzard and the Piedmont collided. An inquiry determined the master of the tug was at fault. 11

In 1893 during a squall on the bay, the Alameda went temporarily out of control and the Piedmont had to slow suddenly to avoid her. Waves crashed upon the deck, and some of the passengers panicked and screamed. One passenger, Joseph Adams of Oakland, died of an apparent heart attack. 3 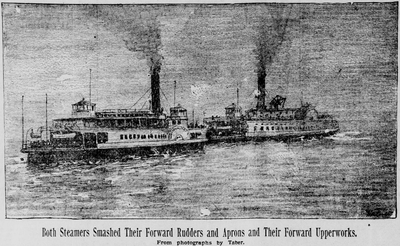 from San Francisco Call 23In 1898, the Piedmont and the Garden City collided in the fog. 10,16,23 Later that year, the passengers and crew were treated to the sight of a graybacked whale while passing near Yerba Buena Island (then Goat Island) 9

In 1900, while waiting for a slip at the wharf to become available, the Piedmont and the Llewellyn J. Morse drifted into each other in a heavy fog. The cathead (a spar near the bowsprit that holds the anchor) of the Morse tore into the Piedmont's superstructure. There were no injuries, but the passengers and crew had a good scare. 19

In 1902, the Piedmont narrowly avoided crashing into the Godiva in a dense fog on the bay. The ships apparently passed so closely that a deckhand on the Piedmont touched the side of the tug Relief which was guiding the Godiva. 5

In 1905, the Piedmont came into Oakland rather quickly and smashed into one of the dolphins (pilings beyond the pier) with such force it knocked some passengers off their feet. 7

In 1906, the paddle wheel struck an abandoned scow, causing many of the passengers to panic and don life preservers. The ship was crowded with refugees fleeing San Francisco after the 1906 earthquake. 22

In 1911, a car driven by Mrs. Herbert Stockton plunged off the Piedmont into the water. Walter J. Seaborn dove in and rescued her, and a diver was hired to recover the automobile. 17,18

In 1913, the Piedmont crashed into the Newark in a dense tule fog on the bay. It was a glancing blow and there were no injuries or serious damage. 15

In 1920, the Edward T. Jeffrey crashed into the Piedmont while approaching Oakland. The Piedmont suffered damage to the railing and flagpole. 8 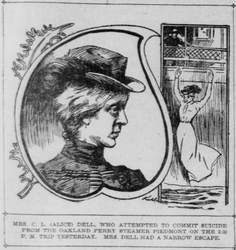 Alice Dell 20Over the years, there were numerous people who attempted suicide by jumping off the Piedmont into the bay; a few examples are listed here. In December, 1900, a women named Alice Dell jumped from the Piedmont into the water in an attempt to commit suicide, but she was rescued. 20 In 1901, a young man named William Jaurez, son of a Napa County rancher, committed suicide by jumping into the bay from the front of the Piedmont. 6 B. Nasu was less successful in his attempt. After drinking heavily he jumped off the Piedmont, but he was rescued and survived. 14 In 1903, Mrs. Max F. Berges dropped a bottle of carbolic acid on the deck then leaped from the Piedmont. She was rescued but badly bruised by the paddle wheel. 21

It is likely that Gene's great grandfather worked on the Piedmont c.1893-1900+ as a deckhand.

It seems likely the ferry had several crews because it was run for many hours during the day.