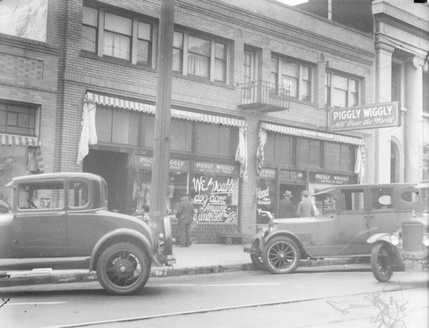 Piggly Wiggly Store, Piedmont Avenue - 1920. Note the "All Over the World" slogan on the sign, and the "We Double dog dare anyone to undersell this store" painted on the window.
Photo courtesy of the Oakland Public Library, Oakland History Room 1

The Piggly Wiggly grocery-store chain was heavily represented in 1920s and 1930s Oakland. The 1928 Polk’s City Directory for Oakland lists fully 39 stores citywide (plus another 11 in Berkeley and 4 in Alameda). One was on College Avenue in Rockridge; another was at 3966 Piedmont Avenue. East 14th St. [International Boulevard today] alone had no less than 6 branch stores.3

According to OMCA Collections, Piggly Wiggly Pacific Co., Inc. “was one of the earliest grocery chains, established by Andrew Williams about 1921.” 2 Piggly Wiggly Pacific was purchased by Safeway Stores in 1928, and all existing Piggly Wigglies in Oakland were converted to Safeways by the mid-1930s - which helps explain why over 80 Safeway stores are listed in the 1941 Polk’s City Directory for Oakland.4 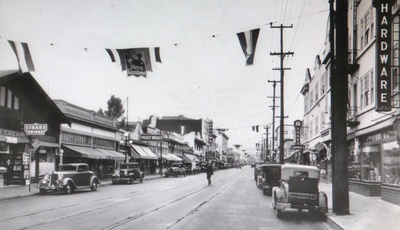 Piggly Wiggly Store, College Avenue looking north toward Shafter Avenue in the Rockridge District, Oakland, California - 1930. Also visible is the Uptown Theater, Campbell’s Shoes, and Tower’s Gift Shop with “Merry Christmas” banner over the street. The store with the "CIGARS" sign is now the bar Ye Old Hut. This is taken from the east side of the street at Lawton. (Photo courtesy of the Oakland Public Library, Oakland History Room) 1 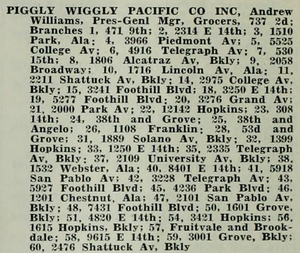 Circa 1927, Piggly Wiggly sponsored an amateur baseball team in Oakland. 5 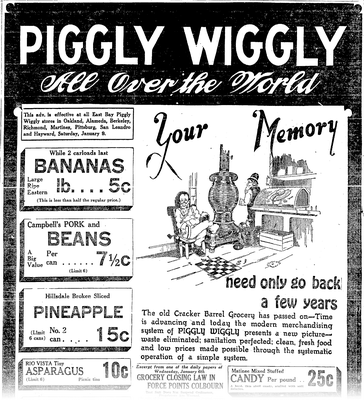