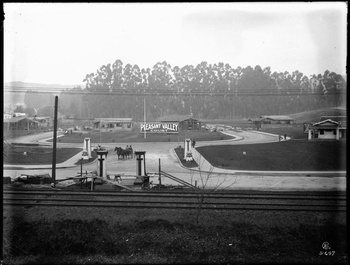 Pleasant Valley Court is a small development near Piedmont Avenue and Mountain View Cemetery, dating back to 1912.

The area was developed by the Realty Syndicate, which advertised the development heavily. They promoted its proximity to the Key System with "9 minutes to the heart of Oakland; 30 minutes to San Francisco," 2 which was all the more impressive in the days before the Bay Bridge. The first reference to the name appears in 1911, with Breuner's advertising their annual bungalow, 1 a house they had staged with furniture which was to be given away. The bungalow was the first house built in the development, and appears in a Cheney Photo Advertising image from the time on otherwise empty streets, with the pillars at the front of the development under construction. The house still stands at 4416 Pleasant Valley Court. 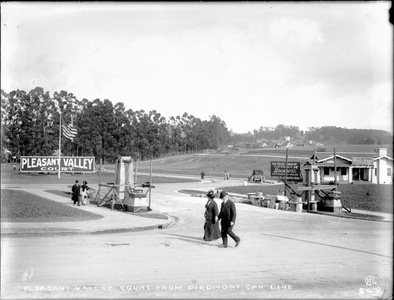 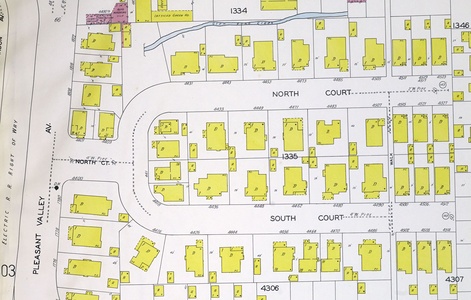 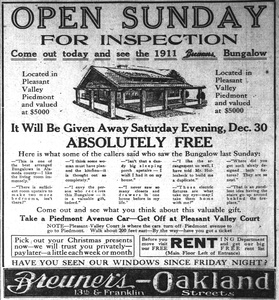 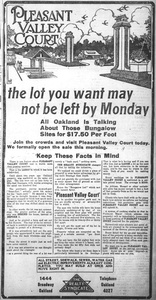 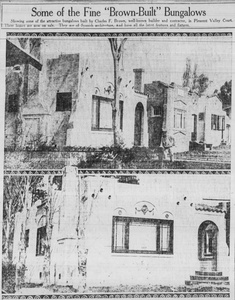 The streets were paved in 1912. 6 By January 1913, 10 homes had been completed; 5 it appears most of the homes were built between 1912 and 1924. A second batch of 12 Spanish-style homes was constructed in 1925 by Charles F. Brown, filling in what was unused Key System right-of-way. 4 Those 12 houses have smaller lots than most of the development.

The U-shaped ("tuning fork") streets were collectively known as "Pleasant Valley Court" and appear that way on various maps. In 1955 there was a minor kerfuffle over the street names. The street signs were worn and in need of replacement, and the sign poster checked what had been designated the official city map, which labeled them "North Court" and "South Court", and duly put up new signs to that effect. City engineer John Morin said the names were official, and it would require a city ordinance to change them. A petition was circulated, and a delegation of 50+ people went to the city council requesting the change. But even before the council was seated, they instructed the city attorney to draw up a resolution officially naming the street Pleasant Valley Court. 7,8 Google Maps labels them "Pleasant Valley Court N" and "Pleasant Valley Court S", although the addresses are unique so the additional labels aren't necessary.

The development is traversed by a little-known pathway which follows the former unused Key System right-of-way from Piedmont Ave. to Moraga. 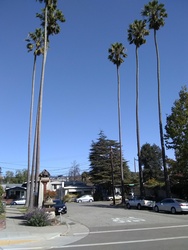 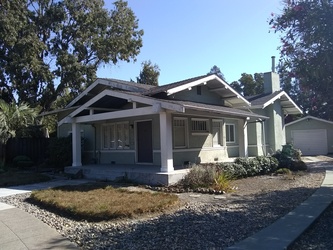 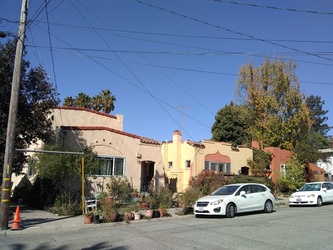 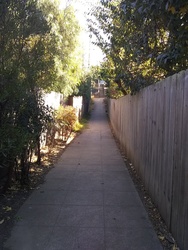