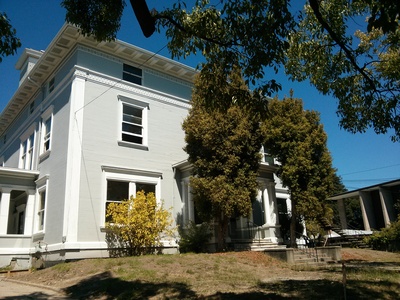 When the house was built, its street address was 146 Monte Vista Avenue. Although the house has always been within Oakland's city limits (its northern property line is also the city boundary), early directories implied it was within Piedmont.& It was the home of William Pierce Johnson and his wife, Florence Lindsay Johnson (they married in Sept. 1860) and their two daughters, Arline (1886–1925) and Josephine (c.1888–19??). In 1917 Mrs. Wm. Pierce Johnson and Josephine Johnson, both residing at 146 Monta Vista Ave., Piedmont, were Charter Members of the Woman’s Athletic Club in San Francisco. And in the 1919 San Francisco Blue Book and Club Directory, the Social Reference Book Mrs. Wm. Pierce Johnson is again listed as living at 146 Monte Vista Avenue, in Piedmont.

So the Plymouth Church Towne House seems to have gotten its name from the Townes, though Florence L. Johnson and Josephine were living there several years after the Townes married in 1909. Were they all living in the home together? It’s certainly large enough for several family members.

Found some more tantalizing bits on the Johnson/Towne family connection in the San Francisco Call:

The Towne House Creative Living Center (CLC), now located nearby at 629 Oakland Avenue, began operations in the Towne House in 1969, but moved to its current location in 1992.