There are laws regarding the placement of political and campaign signs that apply to Oakland. If you're looking for more information, history or background, you might also check "election litter" and "temporary political signs." The reality is that law is rarely enforced, and then only selectively.

Temporary Political Signs: 5405.3 Nothing in this chapter, including but not limited to, Section 4505, shall prohibit the placing of temporary political signs, unless a federal agency determines that such placement would violate federal regulations. However, no such sign shall be placed within the right-of-way of any highway or within 660 feet of the edge of and visible from the right-of-way of a landscaped freeway.

Nothing in these rules shall be construed as permitting the unauthorized attachment, to supply, street light or communication poles or structures, of antennas, signs, posters, banners, decorations, wires, lighting fixtures, guys, ropes and any other such equipment foreign to the purposes of overhead electric line construction.

A. Except as otherwise provided in this code, it is unlawful for any person, candidate or political committee, except a public officer or employee in the performance of his or her duty, to post, stick, stamp, paint, mark, staple, or otherwise affix any sign, banner, billboard, pennant, flyer, poster, notice, handbill, or advertisement of any kind:

1. Upon any private property, without permission in writing from the owner, agent, trustee or occupant of such premises; or

2. Upon any public property, which includes, but is not limited to:

b. On any public trash or garbage receptacle, or parking meter; or

3. To suspend any banner, sign, or advertising notice from, or attach the same to, any wire or other device crossing or overhanging any public street, sidewalk, park, thoroughfare or right-of-way, without the written permission of the city.

B. Nothing contained in this section shall apply to the installation of terrazzo sidewalks or sidewalks of similar construction, sidewalks permanently colored by an admixture in the material of which the same are constructed, and for which the city has granted a written permit.

C. Nothing in this section shall apply to the painting of house numbers under curbs done under permits issued by the city.

D. Any sign, banner, billboard, pennant, flyer, poster or handbill found, placed, painted, marked, written upon, posted, stapled, taped, glued or otherwise affixed upon any public property contrary to the provisions of this section may be removed immediately by the city.

E. As defined in this section, "sign" shall include, but not be limited to, any sign designed to influence voters to support or oppose any candidate or ballot measure.

F. As defined in this section, "candidate" shall include any person who seeks nomination or election to an office at any election.

G. As defined in this section, "political committee" shall include any committee, organization, association, or corporation organized for the purpose of charged with the duty of conducting the election campaign in support of or in opposition to any candidate or ballot measure at any election.

H. As defined in this section, the term "public" shall include any facility, structure, building, property activity or object which is owned, leased, or otherwise operated, controlled or managed by the city of Oakland, Redevelopment Agency of the city, any department, office, agency or sub-agency of the city.

It is declared to be unlawful for any person to place, stick or affix, or cause or permit any other person in his or her behalf to place, stick or affix, any broadside, booklet, card, circular, dodger, handbill, poster, or any other advertising medium of a like or similar nature, in or upon any automobile or other motor vehicle not in such person's rightful possession, while said automobile or other vehicle is in or upon any public street, highway or other public place.

One observer's experience in several Oakland campaigns,  candidates and ballot measures, is that the city ordinance is selectively enforced against challengers to incumbents and against committees that oppose measures supported by incumbents. Nor  have I ever heard of it enforced against realtors placing their "open house" signs on public property.

Based on conversations with two past candidates, a call is made by an aide to an incumbent to the appropriate city department to remove the signs. I've seen this done on Saturdays when assumedly OT is paid. The signs are usually not destroyed but stored at the Corporation Yard. You then go there and pick them up. Employees there are apologetic and courteous. Sometimes the signs are destroyed without notice.

Signs can cost between $1.50 and $3.00 plus $1 for wire frame. Destroying them is a financial penalty to the typical challenger.

According to my conversation with a long time Berkeley activist, Berkeley has a similar law on it's books but rarely enforces it against political signage because it does not want to get sued for restricting freedom of political expression. Few exceptions have been for signs that were hazardous or extremely ugly. Berkeley does punish candidates and ballot committees that do not promptly remove signs from public property by assessing them personally with the cost of removal.

A  few years ago I spoke with someone in the local ACLU chapter. That person agreed that Oakland's policy as applied to political campaign signage appeared to be unconstitutional and to contact them if had a clear cut example.  In that particular election all the candidates including incumbents, started planting their signs on public medians. The City did not remove any of them.

If you see any signs that are posted in violation of the OMC Section references above, the best practice is to report the signs to the City's Public Works Department, which has the responsibility for removing such signs, using SeeClickFix or the SeeClick Fix app, or reporting the problem through the City's website.  Ideally the ordinance would be enforced equally. Political signs (heck, all signs) can be a distraction if placed incorrectly, and all too often they are put up before the 90 day limit and left up way after the 10 day limit. Please post examples of violations here, along with the date and approximate location. 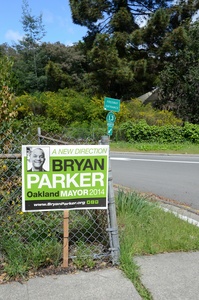 "Someone didn't like these @bryanparker2014 campaign signs hung on the fence of a blighted property." by @davidcolburn

Screengrabs of the SOP because the PDF was not released in machine readable format: 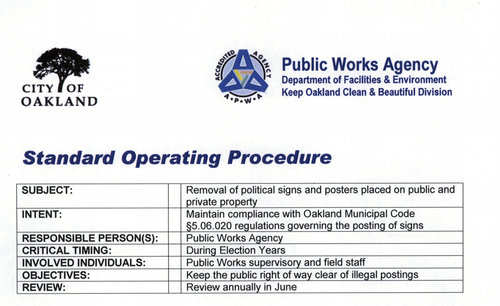 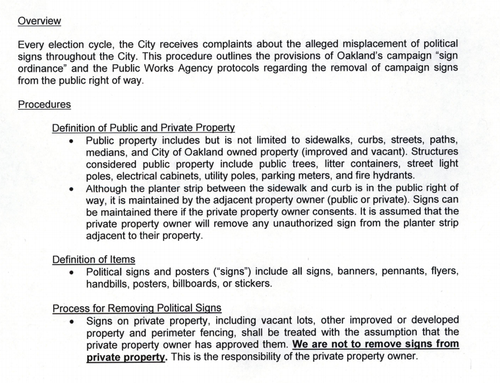 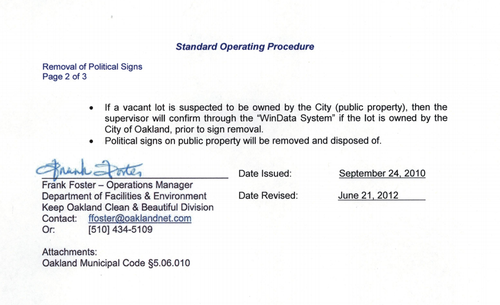