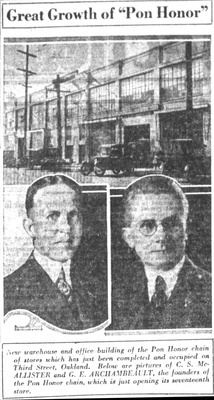 Pon Honor Stores was a local chain of grocery stores founded by George E. Archambeault and Clarence McAllister. 1,5 It started with the Royal Grocery on Piedmont Avenue c.1906, and grew to 39 stores by 1928 when they were purchased by Public Food Stores of San Francisco. 7 The used the tag line "we split the nickel." 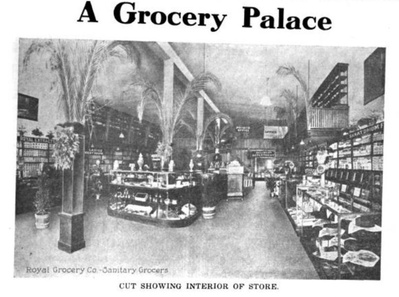 The first reference to Royal Grocery in the Tribune is a want ad looking for a delivery wagon driver, address 4108 Piedmont Ave. in 1907. 2 A 1917 ad lists Royal Grocery (store no. 1; credit and delivery) on the lower floor and Royal Grocerteria (store no. 2; cash and carry) on the mezzanine at 4001-03-05 Piedmont Ave. 3 in the Julia Morgan-designed Fred C. Turner Shopping Center building.

By 1920, the Royal Grocerteria chain had grown to 8 stores including one in Hayward and one in San Leandro, and they announced they were changing the name to Pon Honor:

In selecting a new name for these eight busy grocerterias we decided that the name PON HONOR would convey to the public our one desire to be always upon honor in all business dealings with our customers; to serve them intelligently and honestly; to work for their interests as well as our own and to give you the lowest prices commensurate with good merchandise.
No Change of Management—the Same Dependable Service as Always. 4

The chain grew rapidly, and in 1923 opened its 17th store, and a new headquarters and warehouse at 416 - 3rd Street. (That building is now home to Federation Brewing and other businesses.) A December 1927 article showed a picture of store 32 at 3438 Fruitvale Avenue, and said they had recently signed leases for stores 33 and 34. 6 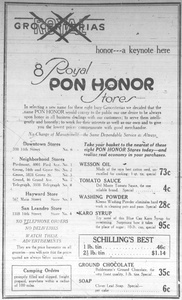