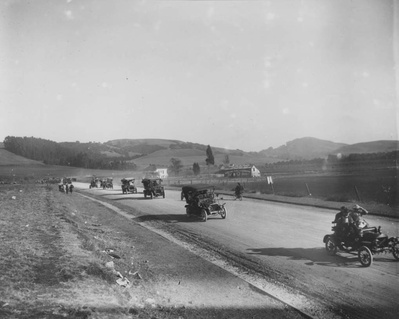 The Portola Road Race was an automobile race held in 1909 and 1911, with the start and finish in Oakland. The races were held as part of the Portola Festival celebrating San Francisco's renewal following the 1906 earthquake. 1

On October 23, 1909, Jack Fleming won at a world record average speed of 64.51 mph. 2 The start and finish was on Foothill Blvd. near 55th Avenue and Fairfax Avenue. The 21.18 mile course was run 12 times, for a total of 254 miles. 1"The course looped, from the Alameda county road between Melrose and Hayward to the Foothill boulevard, through the towns of Melrose, San Leandro, and Hayward." 2 The crowd of approximately 200,000 to 250,000 included mayor Frank K. Mott and California governor James N. Gillette. 8

Two spectators were severely injured, and a dog was killed in different accidents during the race. Otis Johnson was struck by a car that left the course when its steering jammed. Driver Frank Free and his mechanic were thrown from the vehicle and badly bruised. Johnson was paralyzed and expected to die, but survived and in 1910 sued the Reliance automobile company and Free for $20,000. 6 Peter J. McKittrick of Elmhurst had his skull fractured when a tire retaining ring came off the car of H. Michener. 1,4,5 McKittrick died a few weeks later. 7

Note the barn in the background of the 1909 race photo. 2 Painted on the roof and side of the barn is an ad for Martland, Peart and Elkington: 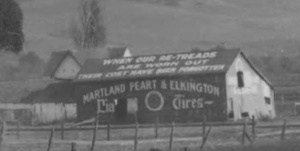 Also note that the cars in the photo are fairly different than those shown in the race photos from the San Francisco Call and Oakland Tribune, and are carrying passengers. It seems likely that the photo is of a race-day event, rather than the race itself. 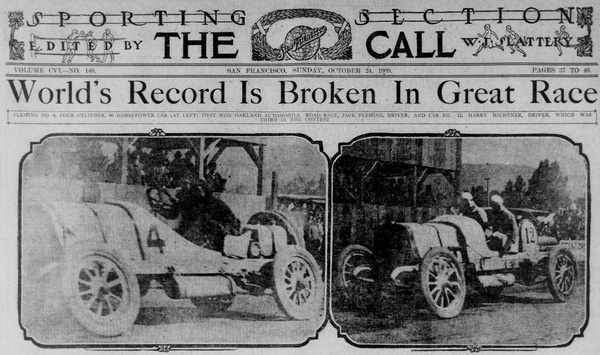 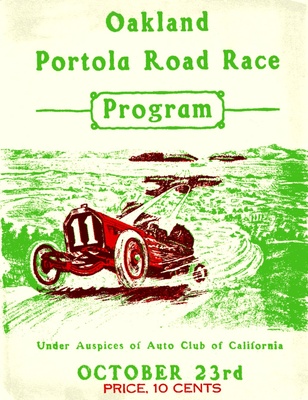