Update: On November 26th, 2013, the Oakland Tribune reported that the Snow Park Dog Play Area was no longer being considered for a dog park. (source: Oakland gives up on Lake Merritt dog park plan)

The Snow Park Dog Play Area is a proposed site for a dog park at Snow Park in downtown Oakland. See the Astro Dog Park Controversy for lots of background on this issue.

To be a part of the future planning process, check out some upcoming Community Design Review Meetings: 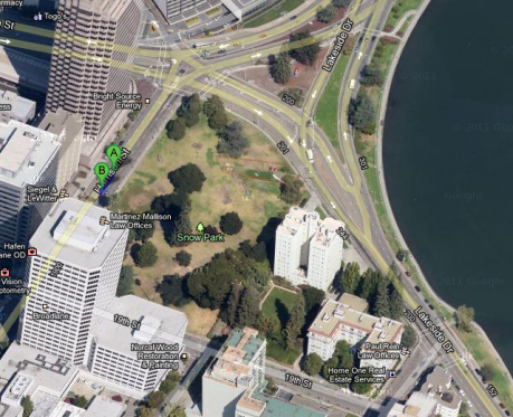 The city is proposing a portion of Snow Park at 19th and Harrison as a possible location for a new dog park (instead of Lakeview/Astro). The dog area would be about half an acre, have an architectural fence and all the usual features. (Oakland Dog Owners Group)[Please note that this information is also located on the Astro Dog Park Controversy entry] 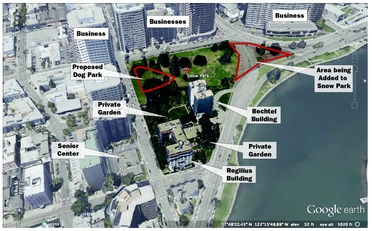 Graphic Showing the proposed area, space being added to the park, and adjacent buildingsAfter that meeting, Jones-Taylor and members of Quan's staff held public outreach meetings for nearby businesses and residents and distributed hundreds of flyers to adjacent buildings.

On Wednesday, April 10th, the city held a Community Design Review of Proposed Dog Play Area at Snow Park– at 6:30 PM (scheduled to end at 8:30 PM). Meeting notes are available here. at Lakeside Park Garden Center, 666 Bellevue Avenue. Per the city: "Public comment and input on the Design Components of a proposed Dog Play Area at Snow Park are sought at this community meeting. General comments will be heard at a future Parks & Recreation Advisory Commission (PRAC) meeting." 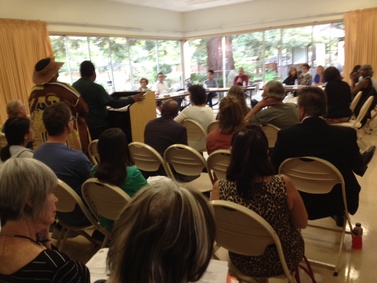 Parks and Recreation Advisory Commission Meeting, Sept. 11, 2013On Sept 11, 2013 PRAC heard a motion to recommend approval of the Minor Conditional Use Permit (MCUP) to the Planning Department. Parks and Recreation staff has recommended that the proposal be approved. At the meeting, 17 speakers spoke on both sides of the issue; the majority were in favor. A handful of residents of the Regillius spoke against the proposal, mainly on the theory that they will be affected by noise and that a nearby dog park would negatively affect their property values.

Commissioners asked questions about costs, and the city's architect estimated that it would cost somewhere near $200,000 to build (in comparison, the children's play area being built at Snow Park is estimated to cost $300,000). Most of that money would be privately raised by ODOG. Commissioners were also concerned about maintenance, and voted to include an amendment to the MCUP proposal to include a recommendation that the city enter into a Memorandum of Understanding (MOU) with ODOG about maintenance (ODOG has long-standing MOUs with the city for the city's other dog parks, such as in Joaquin Miller Park.) The motion to recommend the passage of the MCUP was passed by PRAC 6-1. Commission Chair Barry Miller was the lone dissenting vote, saying he'd prefer the park to remain as-is: a largely unused lawn, and he'd rather see a dog park created similarly to the new Latham Square project, where a street was reclaimed for park use.

Staff from the Planning Department said that the next step was that the proposal for the MCUP would now go to the Planning Department, who would write a report. There would then be a 17 day public comment period, after which Planning would administratively make a decision. Once the decision is made, there is a ten day appeal period. If appealed, it would then go to the Planning Commission, who would be the final word. It would not go to City Council, as did the Astro Park controversy.