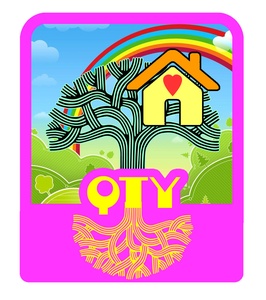 
The QTY Treehouse is a Queer and Trans Youth (QTY) drop-in space located in West Oakland at 1684 7th Street, Oakland CA 94607.  The QTY Treehouse is a subset of HIFY (Health Initiatives for Youth) and is funded by the Oakland Fund for Children and Youth (OFCY).  It was founded on November 9th, 2012.  The QTY's mission is to serve queer and trans youth, particularly those of color and homeless.

The QTY is a drop-in space for youth to utilize.  Its resources include but are not limited to: snacks, referrals to other resources, computer access, wireless internet, a drag closet, clothing, games, and an honor library.  The QTY also holds a variety of programs throughout the year with varied themes and emphases.  Programming is youth centric, youth led whenever possible, and will serve in some way to impact youth in a positive light.

To stay up to date about programming, contact the QTY via email at [email protected] or [email protected] and get added to their newsletter.  They can also be reached via phone at (510)281-0980.  The QTY's Facebook can be reached at www.facebook.com/QTYTreehouse  The QTY's Twitter and Instagram accounts can both be followed at @hifyouth

Hours of operation are the following: Mon/Wed 3p.m.-5p.m.