The R. A. Shuey Creamery was a dairy company at 5960 Telegraph Avenue from 1910–1953. The business was incorporated in 1910 in Oakland by brothers Robert A. Shuey, Charles Shuey, William A. Shuey, and L. E. Phillips. 1 It was purchased by Foremost Dairies in 1952.

The 1911 directory lists it at 2410 Stuart Street in Berkeley, Robert A. Shuey president, Charles Shuey treasurer. In 1911, there was also a Shuey Poultry Company in Berkeley, run by William A. Shuey. 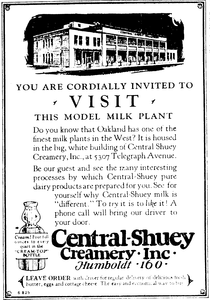 1926 adThe Central-Shuey Creamery was incorporated in 1920, by combining the R. A. Shuey Creamery, the Central Creamery and the Oakland Cream Depot. In 1926 their main processing plant was at 5307 Telegraph.

Foremost had 3.9% of fluid milk sales in the Alameda-Contra Costa region in 1953 through its operations of the Diamond Dairy and Shuey Creamery facilities. 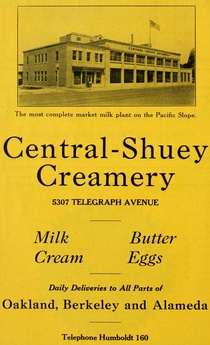