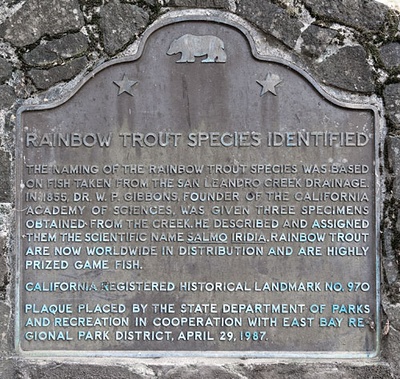 The Rainbow Trout Species Identified is a California Historical Landmark, the plaque reads:

Located in Redwood Regional Park, the plaque is 50 yards past the Redwood Gate entrance kiosk.

Initially it was thought that Gibbons had discovered a new species. It was later determined to be the same species named by Johann Julius Walbaum in 1792 based on specimens from Siberia, and the scientific name Walbaum gave it, mykiss, was given precedence over iridia. It was also found the trout in the Pacific basin were more closely related to Pacific salmon, Oncorhynchus, than to the Atlantic ones, Salmo, so in 1989 the scientific name became Oncorhynchus mykiss. But the common name, rainbow trout, lives on. 3