Charles E. “Raincoat” Jones (August 18, 1889 – January 6, 1968) was a bootlegger during prohibition, legendary gambling man, and a part of the fabric of 7th Street in West Oakland. He helped finance some of the jazz and blues clubs on 7th Street. 1,2,3

There were various stories about the nickname “Raincoat,” 2 but according to a 1968 obituary in The Combination magazine, it was "because he refused to let a broke man go home without a raincoat if it was raining, or if he was hungry for food." 4 He is said to have paid people's union dues to keep them employed, made down payments on homes to get people started, and bailed many people out of jail, along with other good works. 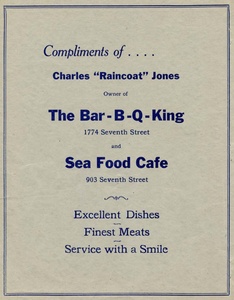