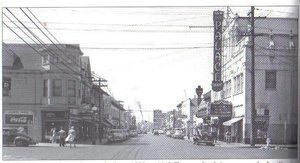 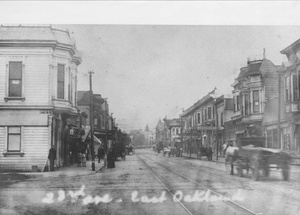 San Antonio is a neighborhood of Oakland in the San Antonio district.

Rancho San Antonio  is a historical area named after the the Peralta Ranch during the Mexican era of California. At the western side of the neighborhood, 13th Ave was used as a logging road: lumber came down the hills to the waterfront via the street.

In 1851 James LaRue bought the tract from the Peraltas and it was subdivided in 1854. In 1856 San Antonio, Clinton and lynn merged and became the township of Brooklyn. Brooklyn incorporated in 1870 and was annexed by Oakland in 1872. Part of the annexation deal was that the county seat would move from Alvarado to Independence Square (now San Antonio Park). Athough the county seat didn't quite make it to San Antonio Park, Alameda County did have its seat nearby at International and 20th for two years.1

The area was heavily settled by Portuguese and other Europeans. It had a small commercial district on 23rd Ave that included a movie theater called The Palace. During the 1960's and 70's urban renewal period, the displacements of African Americans and Latinos from West Oakland brought many Black and Latino Families to settle in this area.

During the late 60's and 70's the radical movements of the time were active in this area. The Black Panthers had a Free Breakfast Program on 23rd ave and many Chicano organizations did work in the area as well. On July 26th, 1970, Oakland Chicano Moratorium Protest against the Vietnam War took place in San Antonio Park.

In the mid-70s, the Oakland Tribune called the area "primarily black,"2 but this shifted as Asian families, especially Cambodians and Vietnamese, started moving into the area starting in the 80's and 90's. In 1992 the Tribune reported that the area was a "new Chinatown" and that 34 languages were spoken there.3  There was also a good size Latino population since the 1960's.There was an increase of Latino immigrants, especially from Central America and Mexico in the 1980's till the 2000's. This added even more to the diversity of the neighborhood.

In the 80's and 90's, after the crack epidemic of the 1980s, the area gained a notorious reputation because it was home to many gangs and Drug Dealers. Chicano gangs like E15th st (Quince) and Black Turfs like the Twomps (later the Murder Dubs) and several Asian Crip Gangs had made the area pretty dangerous. Many shootings and violence plagued the area.

San Antonio Park was home to the Cinco de Mayo Festival during the 1980's till the year 2000. The Annual Malcolm X Jazz Arts festival is held every year at the park and the Xicana Moratorium day event is held in Late August.