Ranked Choice Voting (RCV) has been used in Oakland since 2010. Oakland elects its Mayor, City Council members, City Attorney, City Auditor, and School Directors using Ranked-Choice Voting. RCV was approved by Oakland voters in 2006 with the adoption of Measure O.

The history of Ranked-Choice Voting in Oakland goes back to 2000. In the 2000 general election, Oakland voters passed Measure I, which provided for special elections to fill city council vacancies, and also provided that alternative voting methods, including Ranked-Choice Voting (referred to as Preference Voting in the City Charter) be used to the greatest extent feasible to increase voter participation. In 2002, Oakland voters passed Measure H, which amended the Charter to provide for special elections and, if necessary, instant runoff elections to fill mayoral vacancies. Then in November 2006, Oakland voters passed Measure O, which mandated Ranked-Choice Voting, with 68.6% of the vote – receiving more votes than for any other municipal candidate or measure in the 2006 general election. The Measure O ballot question was, “"Shall the City Charter be amended to require the use of Ranked-Choice voting, known sometimes as instant runoff voting, to elect city offices by a majority vote at a November election without holding a prior June election?" The first Oakland election that used the RCV system was the 2010 general election.

What is Ranked-Choice Voting?

Ranked-Choice Voting or "Instant Run-Off Voting," allows voters to rank up to three candidates, in order of preference, when marking their ballots. Ranked-choice voting eliminates the need for run-off elections, and is approved for use in Berkeley, Oakland and San Leandro.

Does my vote still count if I vote for the same candidate three times?

Yes. Your vote will count only once for that candidate.

Does my vote still count if I only select one choice?

Yes. Your vote will count for your one choice.

Who is elected using a Ranked-Choice Voting ballot?

How are Ranked-Choice votes counted?

How Do I Mark The Ranked-Choice Voting Ballot?

Must I rank three candidates for each office?

If I really want my first-choice candidate to win, should I rank the candidate as my first, second and third choice?

Can I give candidates the same ranking?

No. If a voter gives more than one candidate the same ranking, the vote cannot be counted. Only one candidate can represent the voter's first, second, or third choice.

Can I write a candidate's name on my ballot in any column?

Will there be a subsequent run-off?

No, Ranked-Choice Voting eliminates the need for run-off elections.

What if I have further questions?

If you have further questions about ranked-choice voting, please call the Alameda County Registrar of Voters Office at (510) 272-6933. 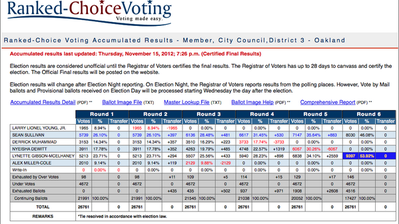 an example of how RCV works

Easy to Understand Video from Minnesota Public Radio (they also have RCV in Minneapolis).