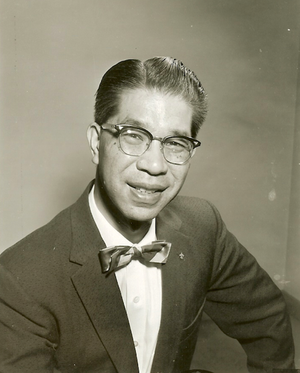 Dr. Raymond Lenneau Eng (August 1, 1911 – April 22, 1994) was an optometrist and was elected to city council several times in the 1960s and 1970s, serving 16 years. He was the first Chinese American elected to Oakland's city council. Dr. Eng was the grandfather of OUSD school board member Aimee Eng.

Raymond Eng was born in Oakland in 1911 and grew up in Chinatown, and was a third generation to be born in California. His grandfather was Ng Len Noy, a merchant from Marysville, and his grandmother was Ng Len Noy (Yee Jin Tai, Jenny) from North San Juan.

Eng attended Lincoln Elementary and graduated from Oakland High School in 1929. He graduated from UC Berkeley in 1934 with a degree in Physics-Optometry. Eng and his first wife Shirley May Eng had 3 children: Wellington Eng, Charmaine Eng (Ngin), Weylin Eng, He had 2 children with his second wife Jennifer Eng: Candace Eng, and Cimberly Eng (Tamura). NB: The family name was originally spelled Ng, but was changed sometime in the 1930s. The Chinese character 伍 remained the same.

He was active in various community organizations, and was the leader of the first integrated Boy Scout pack in the country in 1935 2. In 1955 he received the Silver Beaver award, the highest award given to adult leaders7 and served for two years on the National Inter Racial Relations Committee for the Boy Scouts of America. In 1953, he served on multiple committees for the Shoong Family Cultural Center (originally named the Chinese Community Center) which was dedicated on February 22, 1953. He was the president of the Oakland Lodge of the Chinese American Citizens Alliance in 1953 and again in 1956. His father, Eng Yum Sheun, was one of the founding members when it was chartered in 1912. Eng was an active member of the Wa Sung Community Service Club. 4

The community organizations he was involved with include: United Crusade, March of Dimes, United Cerebral Palsy, Cancer Society and Heart Fund, the Lions Club Oakland Blind Center, and the North Oakland Optimist Club. He was a founding member and onetime president of the Oakland Cosmopolitan Lions Club (1956-57). In 1963 he was elected to be the first Asian-American to be the District 4C3 Governor of Lions International. He was on the board of numerous organizations including the Oakland Chinatown Redevelopment Council, East West Institute, Chinese American Citizens Alliance, and the Oakland Chinese Community Center. In the 1990's his story was included in the Hall of Pioneers, an exhibit honoring Oakland Chinatown's early community leaders.

Dr. Eng had offices in Chinatown, Temescal, and San Francisco. Dr. Eng was noted as a generous man, and regularly adjusted his fees to match his patients' incomes. 2 His first office opened in the mid 1930's at 12th and Broadway above a pharmacy. His office later moved to Chinatown in 1940 at 832 Webster Street, directly across from his birthplace. A second office was opened later in San Francisco on Grant Avenue. His Temescal office opened later in the 1960's.

He ran for the Alameda County Board of Supervisors in 1954 and lost several other races before being elected to the city council in 1967. 1 Eng represented district 3, which at the time included Chinatown and West Oakland. His election in 1967 was the third time he'd faced incumbent Howard Rilea. 6

While on council, Dr. Eng was one of the people who worked to bring the Athletics from Kansas City to Oakland. Eng also served as vice mayor in 1973. He was friends with fellow council member Frank Ogawa. In 1969, during a time of rapid growth with the onset of containerized shipping and expanded freight service to Europe and Asia, Dr. Eng joined Oakland Port directors, Mayor Reading, City Manager Jerome Keithley and shipping executives on the Far East Trade Mission to Taiwan and Japan. 8,9

In 1977, Eng served on the new Public Works Committee of the city council, and was chairman of the Social Concerns Committee. 3

In 1978 his cancerous larynx was removed. Speaking was painful and could only be done through a hole is his throat. 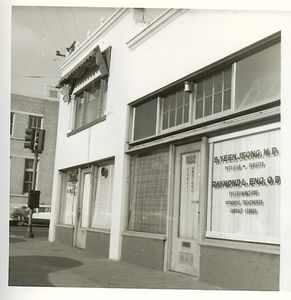 Chinatown office on Webster at 9th 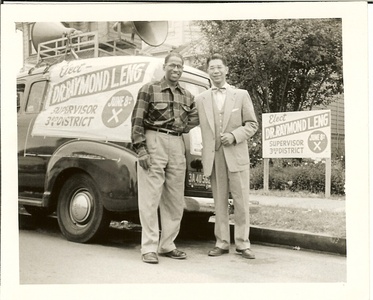 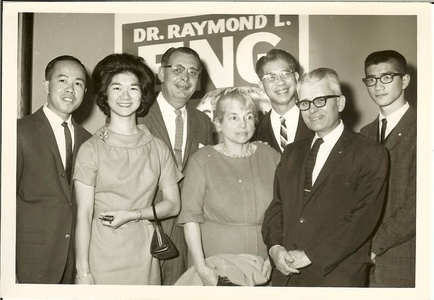 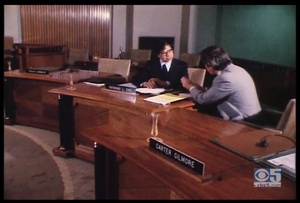