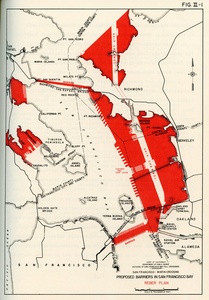 In the late 1940s, John Reber, a theatrical producer and schoolteacher, developed and advocated a plan that would have dammed and/or filled large portions of the San Francisco Bay, creating massive freshwater reservoirs in the north and south portions of the bay, and extending the shoreline of Berkeley and Oakland to the west of where they are now. In addition it would have provided underground storage gasoline, munitions, and airplane hangars.

The plan was tested extensively by the U.S. Army Corps of Engineers, which constructed a 1.5 acre model of the San Francisco Bay (location indicated in map) to test its impacts. The model, which was used exclusively for research until about 2000, is now an educational and interpretive center open to the public.

Parts of it are not dissimilar from a 1913 plan drawn by Ross J. Brower, which would have filled much of the bay from Richmond to Alameda, but would have skipped damming the south bay. 1 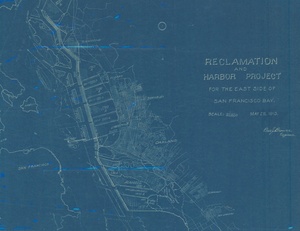