The Red Rock Quarry owned by HM Maxwell was located on the back corner of Mountain View Cemetery along Moraga Ave. The Piedmont Corporation Yard at 889 Red Rock Road is the approximate location.

For 40 years the Henry Maxwell Family owned the property that was once used as the "picnic grounds" of Blair's Park. Maxwell developed a dairy known as Maxwelton Farm. After his death in 1912, Mrs. Nellie Maxwell took over the operation. She was also the owner of the Red Rock Quarry and with her own construction company she paved many of Piedmont's streets. 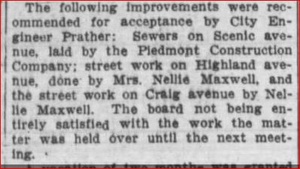 Present day Maxwelton Road which is in both Piedmont and Oakland is named after and approximate location of Maxwelton Farm and Dairy.

Nellie Maxwell was born Nellie Rand in 1868, she is the younger sister of Lila Mandana Rand. Lila was the wife of Frank C. Havens. The Maxwells lived at 235 Sheridan Ave in Piedmont.