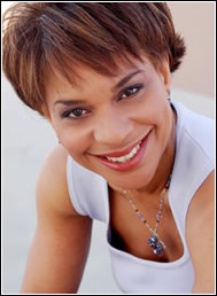 Renel Brooks-Moon has been the host of the "Renel In The Morning Show" on 98.1 KISS-FM since 1997; the show is currently named "Renel & Christie in the Morning" which she co-hosts with Christie James.

Born in Oakland, California to parents Nathaniel and Juanita, who were both educators, Renel lived in various Bay Area cities. Following her graduation from Woodside High School, Renel attended Mills College in Oakland, where she earned her Bachelor's degree in English in 1981.

Having had her breakthrough as an on-air radio personality on KMEL in 1986, Renel was part of the popular "Morning Zoo," but went on to host her own show "Renel In The Morning Show" in 1997. Since 2011 Renel added Christie James to the show's lineup and the show was renamed.

Renel has had extensive television experience, including hosting a music video program on the California Music Channel, and host of "Sports In The Classroom", a weekly high school sports education show, and host of "A's Inside Pitch", a weekly magazine series during the Oakland A's 1995 Season. These shows featured Renel interviewing Oakland A's team leaders, including Mark McGwire, as well as numerous sports luminaries. Renel spent the 2004 baseball season in front of the camera for Fox Sports Net Bay Area as co-host of the San Francisco "Giants Pre-Game Show".

Renel has appeared on the annual United Negro College Fund Telethon, as a presenter for the Northern California Emmy Awards (she was a nominee in 2002 and 2006), and as part of the "Bay To Breakers" television broadcast team. Since 1998, Renel has been a segment reporter for CBS 5 and UPN 44 "Eyewitness News", contributing weekly entertainment and sports reports, and feature reports on "Evening Magazine."

In 2000, Renel was honored to be chosen by the San Francisco Giants as the Public Address Announcer for the San Francisco Giants at AT&T Park (then Pacific Bell Park). Seated in one of the best seats in the house, Renel spends every home game surrounded by 40,000 baseball fans and an enthusiastic production crew. In her short tenure in the P.A. booth, Renel has logged such memorable experiences as the Park's inaugural Opening Day, Barry Bonds' incredible batting and home run records, and the Giants league and division championships. Renel's work in the booth has been recognized by the Major League Baseball Hall of Fame as the first female announcer of a championship game in any professional sport. Her scorecard from Game 3 of the 2002 World Series can be viewed in the Hall at Cooperstown!

Renel is Vice-Chair of the Friends of Faith, a non-profit organization dedicated to breast cancer awareness, education and prevention. Renel also serves on the board of the San Francisco Giants Community Fund, which assists organizations and provides services for at-risk youth and underserved families. In 2006, Renel was enrolled as a lifetime member of the Little Sisters of the Poor Auxiliary, dedicated to caring for the elderly poor.  Renel's community work has been honored by the Bay Area Black Media Coalition, Women of Excellence, the National Council of Negro Women, East Oakland Youth Development Center, the Glide Foundation, and several others. March 18th, 2005, was proclaimed "Renel Brooks-Moon Day" in San Francisco by Mayor Gavin Newsom , who honored Renel for her 20 years as a Bay Area media personality and her community activism.