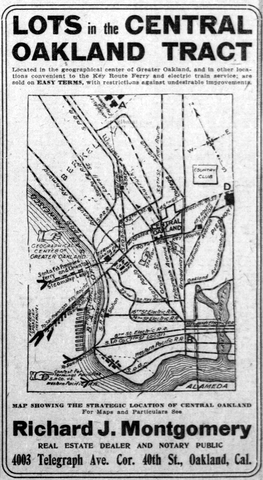 By 1870, the Richard's parents had moved from Yuba City to Oakland. In 1881, Richard was appointed U.S. Deputy Collector of Customs and worked on the border with Mexico. He returned to Oakland in 1892 and went into the real estate business.

In 1908, Richard and Ellen took out loans totaling more than $3,600 from the Central Bank, using some of their property holdings as collateral: "...the loan of $760 to Ellen Montgomery, with a mortgage on property in Thirty-ninth street near Grove, and a loan of $2,892 to Richard Montgomery, secured by lots near Telegraph avenue in Fortieth and Forty-third streets." 4

Richard Montgomery was born April 3, 1863, to Zachariah Thomas Montgomery (1825–1900) and Ellen Bridget Evoy (Montgomery) (1828–1923) in Yuba City, north of Sacramento. Zachariah was a well-to-do lawyer born in Kentucky who moved to California during the Gold Rush. Ellen came to California during the Gold Rush with her mother, Bridget Evoy. Ellen was Zachariah's second wife; his first wife, Frances Helena (Montgomery) (December 20, 1835–July 18, 1856) died just two years after they were married, several months after giving birth to their first child, Thomas. Zachariah and Ellen had eight more children, only six of whom survived into adulthood:

By 1870, the family had moved to Oakland. Richard never married, nor did most of his siblings.

Zachariah was a publisher as well as lawyer, publishing The Occidental (later The Occidental and Vanguard) newspaper in San Francisco. He was supportive of the Confederacy during the Civil War, and an angry mob destroyed the printing presses and offices of the paper following the news of Lincoln's assassination. 3

Zachariah practiced law in Oakland from 1871–1881, and was the founding president of the Oakland Bar Association in 1877. From 1885-1889, he was an assistant U.S. Attorney General under president Grover Cleveland. 3 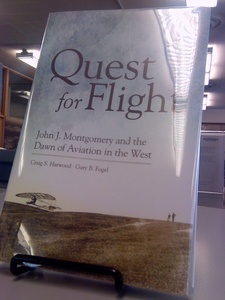 Quest For Flight at Oakland History Room
photo CC-A from Our OaklandOne of Richard's siblings that did marry was John, who was a professor at Santa Clara College (now University) and an aviation pioneer. John married Regina Cleary (February 15, 1858–March 26, 1958) of San Francisco on June 30, 1910. Sadly, he died a little more than a year later while testing a glider that he had flown successfully numerous times before. 1 There is a replica of the Evergreen at the Hiller Aviation Museum, which features the eclectic aircraft collected by inventor Stanley Hiller, Jr., son of Oakland resident Stanley Hiller, Sr. John's death occurred six years after the death of one his test pilots, Daniel Maloney, who died when the wing of his craft collapsed at 3,000 feet. 5 Maloney had performed as an aeronaut in Oakland, where he sustained injuries but was saved from death because he fell into a tree. 6 John was so devastated by Maloney's death that Richard attended the funeral in his stead.

Richard's uncle, one of Zachariah's brothers, was the Reverend George Thomas Montgomery (December 30, 1847–January 10, 1907). He was a Catholic priest who later became a bishop. He was noted for being the first American-born bishop of the Diocese of Monterey-Los Angeles, and for caring for victims of the 1906 San Francisco earthquake. 2