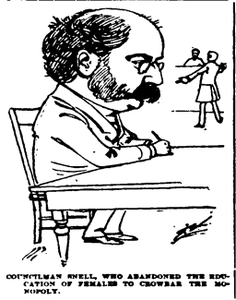 an 1893 caricature of Snell. Caption reads: "Councilman Snell, who abandoned the education of females to crowbar the monopoly."1Richard Snell's sister, Mary Snell, was the founder of Snell Seminary. His sister, Sarah Snell, was called the "Mother of Snell's Seminary" and is also credited with founding the school.3 He served as a principal of the school. He lived at 568 12th Street.4

In 1893, while serving as a City Councilmember, Snell led students from Snell Seminary in an act of civil disobedience. Along with then-Councilmembers Henry Dalton and William Dow and numerous other officials and "prominent citizens," Snell and the students tore up bits of the railroad tracks along the wharf. Apparently they were fighting the railroad monopoly.2