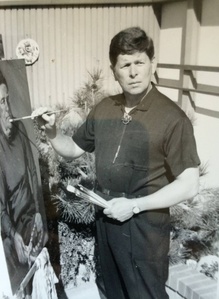 Robert Clifford Rishell (February 14, 1917 – 1976) was an Oakland artist, one of the founders of the Oakland Museum of California, and the son of mayor Clifford Rishell. He painted mostly in oils, but is also known for several large fresco murals.

Rishell was a graduate of the California College of Arts and Crafts (BA and MA) and received adult school teaching credential from University of California at Berkeley. He studied under Xavier Martinez.

While studying at the CCAC in the early 1950s, Rishell worked as the maitre'd at The Showboat restaurant at Jack London Square.

Rishell taught art for many years. Some of his students were with him 20+ years at an adult night school art class in San Leandro. Another class had Saturday outdoor painting at Dunsmuir-Hellman House; when he heard it was going to be demolished, he worked to save it. 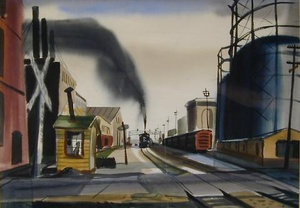 untitled watercolor, c.1965 2Rishell's painting In the Beginning was selected as the first Christmas card for the Easter Seal Society of Alameda County in 1966. 1