Robert Hickmott (1852-c.1920) was the founder of the Hickmott Canning Company, where a young Jack London worked for 10¢ an hour. 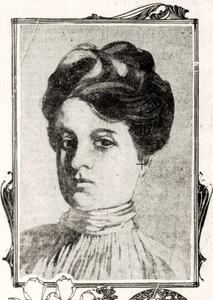 Georgia Hickmott, 1903Born in England, Hickmott came to the U.S. in 1875, and married Lillian May Hickmott in 1877. Robert worked in a cannery in Sacramento before going into business for himself around 1890. He is credited with perfecting asparagus-canning techniques, and seems to have built a sizable fortune from his canning and growing business. The Hickmotts moved around a fair amount, but lived in Oakland, Eden Township (now Castro Valley), and Ross (in Marin County) amongst other places.

Their daughter, Georgia (“Georgie”) Hickmott Clark (1880-1958) married Edwin Charles Clark in 1904, and later had three children. They lived at 492 Hudson Street in Oakland.

Now for the interesting stuff.

I suspect Dr. Woods had already burned his bridges by April 21, when he was quoted as saying, “I saw in Miss Georgia a very crude but lovely dispositioned girl” and said he was the one who had broken the engagement, due to heart problems.3 Interesting how his story changes.

By July, Woods and his ‘sister’ had disappeared, under suspicion of having murdered Colonel William J. Best and stolen $600 from him. The DA inquired at Chicago’s Rush Medical College, where Dr. Woods said he was trained, and learned that Woods had never been a student there. 5, 6 Best’s autopsy was complicated by his body having been embalmed, yet still showed traces of poison.7 And as it turned out, Alice was “Doctor” Woods’ wife, not sister. He had been removed as pastor of a Pennsylvania church for bigamy. The pair were fugitives, wanted on suspicion of a number of crimes (including arson) around the country. 8

It seems the vice president and manager of the Oakland Central Bank, William G. Palmateer, found the information for Robert that led to the exposure of Woods and the subsequent breaking of the engagement.9

(This may seem largely tangential to an Oakland Wiki, but Hickmott Canning was based in Oakland at that time.)