Robert Roche is an Oakland police officer. He was placed on paid leave after firing tear gas into Occupy protesters: "The crowd, hit by that tear gas on Oct. 15, 2011, was attempting to aid Iraq war veteran Scott Olsen, who had been injured by a beanbag fired by someone else. The incident drew international attention and resulted in heavy public criticism of the police that led to further protests." [source] He was then fired in 2013 because of the incident. He was the only officer fired in connection with the things that happened during Occupy.

He's also been involved in three fatal shootings but was cleared of wrongdoing each time.

In July 2014 he was re-instated onto the police department (this was quite controversial): "Like many Oakland officers, he exercised his right to appeal his punishment to an independent arbitrator and prevailed. Of the last 15 arbitration cases in which officers have appealed punishments, the punishments have been revoked in seven cases and reduced in five others dating back two years. The city prevailed in only three cases, according to a report from the City Attorney's Office." [source] The arbiter is David Stiteler.

On Aug. 14, 2014, US District Judge Thelton Henderson (the judge who's in charge of making sure that Oakland is complying with the Negotiated Settlement Agreement) said that he is ordering an investigation of the rehiring:

"In a sharply worded three-page order, U.S. District Judge Thelton Henderson said he was concerned that Officer Robert Roche had gotten his job back through arbitration two weeks ago despite having been fired by the department for lobbing a tear-gas canister into a group of people trying to help Iraq War veteran Scott Olsen, who had been struck in the head by a police beanbag during an Occupy Oakland protest in 2011.

The judge also cited the case of Officer Hector Jimenez, who was ordered back on the job by an arbitrator in 2011 after being fired for fatally shooting an unarmed drunken-driving suspect in the back three years earlier.

Henderson said he had expressed concerns about Jimenez's rehiring and that the "city's promises to correct deficiencies at that time have fallen short, and further intervention by this court is now require" [SFGate]

Robert Roche is known as a three-time killer. 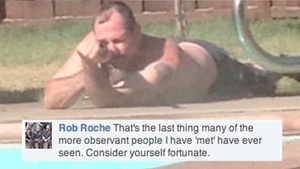 "Rob Roche That's the last thing many of the more observant people I have 'met' have ever seen. Consider yourself fortunate." 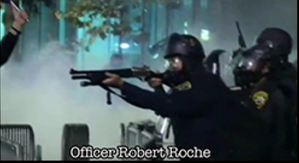