Robert Simson (September 13, 1819 – February 12, 1901) was a lawyer, landowner, and trustee of the College of California, the predecessor of the University of California. He is the namesake of Simson Road near Mills College, and sold the land for Mills to Cyrus and Sarah Mills. He was also one of the first trustees of Mills. 5

He married Jeanette (Janet) Reading (Simson) (August 7, 1842 - 1910), daughter of Major P. B. Reading, at Grace Cathedral in SF in 1866. 1 Reading established the first European settlement in what is now the town of Redding, CA.

The Simsons had one son, Leslie Simson (October 6, 1867 – October 30, 1939). Leslie Simson is noted for accompanying Henry Snow on his African expedition.

Simson was law partners with Nathaniel W. Chittenden, whom he had known since Columbia College. When Chittenden died his estate was worth approximately $200,000, and his will left apparently everything to Simson. Although people who worked with Chittenden testified to the validity of the will, Chittenden's relatives contested it, and hired detectives who said it was not written by Chittenden. The case dragged on, and in a compromise, Simson deeded the property to them in exchange for $45,000. 2 The Chittenden and Simson Compromise Line (between present day 81st and 82nd Avenues) became a reference for real estate transactions. 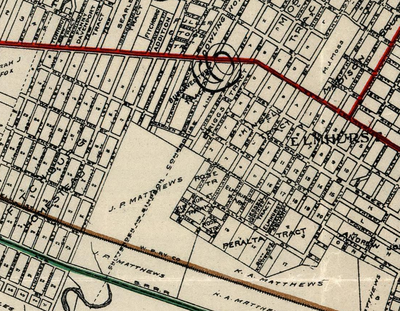