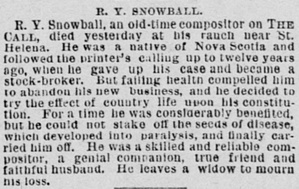 Robert Young Snowball (c.1830 – March 9, 1891) was a compositor for the San Francisco Call and later a stockbroker.

Snowball worked for many years in the printing business as a compositor (through at least 1865), who arranges type for printing. Much of that time (at least 1861–1879) he lived in San Francisco. His obituary suggests the career change came about 1879, but there are ads from 1872 listing him as a stockbroker. 2

In 1879, Snowball is listed at 1379 Harrison St in Oakland. In 1881, Snowball was living at Centennial House in West Oakland, and working as a stockbroker in San Francisco. 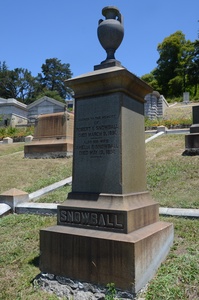 Failing health caused Robert to give up his business as a stockbroker, and he moved to a ranch near St. Helena. 1

Snowball died March 9, 1891 near St. Helena. He is buried in Mountain View Cemetery in the Snowball family lot in plot 33, along with Amelia. Amelia's brother, George Walter Kelley is also buried there with his wife, Mary Tharp (Kelley), and their children, George Arthur Kelley, Muriel Kelley (Countryman), and  Dorothy Hull Kelley.