Snow died following an attack by Adolph Goldman at First Congregational Church. 2 His remains were cremated, and shipped to Ventura County for burial beside the remains of Mrs. Snow. 3 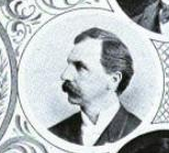