Ron Dellums (image via wikimedia)Ronald Vernie "Ron" Dellums (1935 - ) was the third African American mayor of Oakland after serving as a Member of the U.S. House of Representatives for the 9th Congressional District of Northern California.

Ron Dellums was recruited to run for Mayor through a petition campaign run by a coalition which included Latinos for Dellums, Asians for Dellums, member of the Oakland Black Caucus, and many other groups.  According to historian Robert Stanley Oden, Dellums had the support of the progressive community of Oakland during the 2006 election. There was a lot of optimism with a multicultural and young coalition that supported him. He defeated Ignacio De La Fuente with no runoff (he received 50.18% of the vote, 155 votes more than was necessary to avoid a runoff [source]).

He initiated task forces that  involved residents in problem-solving. There were 41 task forces which examined issues ranging from public safety to economic development and education.

Many of the recommendations were implemented.  For example, the task forces on economic development recommended that the city adopt an "industrial land use" policy which would ensure that more land was preserved for job creating business, rather than the development of so many expensive residential units.  This was implemented by the Mayor and City Council. (Epstein 2012)  They also recommended that a resident of West Oakland be appointed to the Port Commission.  West Oakland environmental activist, Margaret Gordon, was appointed by Dellums in 2007

The education task forces recommended that the school district be returned to local control and that a more diverse teaching force be recruited and supported.  The district was returned to local control in 2007 through the combined efforts of the Mayor, the task forces, the teachers union, the residents and Assembly member Sandre Swanson.    Teach Tomorrow in Oakland  (http://www.teachtomorrowinoakland.net/#!)  was created the same year in response to the task force recommendation for teacher diversity. (Epstein 2012)

Dellums utilized a public safety strategy that combined prevention, intervention, enforcement, and a more assertive approach to police conduct.    As a result the homicide rate in Oakland dropped a total of 40% during the four years that Dellums was Mayor.  (Gammon, R. (2010, Dec. 15)

When  Dellums decided not to run for a second term, several progressives entered the race including Rebecca Kaplan, and  Jean Quan.

In additional to his legacy of accomplishment in activism and governance, Mayor Dellums was mentor to countless political and community leaders including Congresswoman Barbara Lee, Supervisor Keith Carson and Assemblymember Sandré Swanson to name just a few. His oratorical ability to captivate and inspire is undisputed and unmatched in our time. The yet unknown young leaders he has left in the wake of his political career will carry the torch of Bay Area-led progressive leadership well into the 21st century.

Notwithstanding the accomplishments that some saw during his term as mayor, many observers, including people that voted for him as mayor, were disappointed by Mayor Dellums' tenure.  As one blog notes, " he was widely viewed as an absentee leader, whose administration was accused of mismanaging federal funds and generally described as opaque and dysfunctional.." 5 Numerous contemporary articles discuss how Dellums lost support during his term, and many actively advised him to not seek reelection in 2010.6

Relationship with the Media

Ron Dellums didn't have a fabulous relationship with the media. In 2006 he notoriously yelled at a KTVU reporter on the phone.7 This strained relationship unfortunately led to poor coverage of his administration and of Oakland. His dislike for the media aside, Dellums significantly reduced crime in Oakland through proactive and hard-won policies - an aspect of his tenure virtually untouched by reporters save few. The East Bay Express reported in 2010 that, "Critics relentlessly skewered Ron Dellums throughout his mayoral tenure for being detached from his job. Some of those criticisms were legitimate. But when historians look back at the ex-Congressman's four years as mayor of Oakland, they may not be so harsh, particularly when examining violent crime in Oakland. That's because there's no denying the fact that homicides and other violent crimes dropped significantly on Dellums' watch."8

"Nelson Mandela, who turned 95 in a Pretoria hospital last week, credited California with helping to end apartheid by divesting in the racist South African regime that imprisoned him for 27 years. Ron Dellums, a Democrat who represented Oakland and Berkeley for 27 years in Congress, raised the issue when he was first elected in 1971. Maxine Waters and Willie Brown used their Assembly offices to advocate for an end to state pension investments in South Africa throughout the early 1980s."9 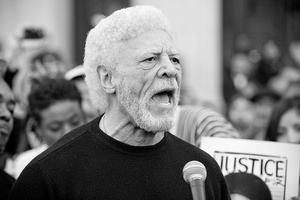 Dellums at a Justice for Oscar Grant protest in 2009. photo CC BY-NC 2.0 by Thomas Hawk