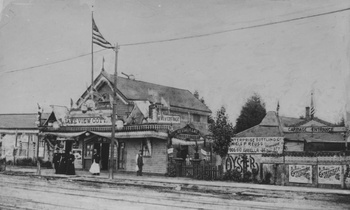 Rosso's Cottage was a restaurant and "pleasure grounds" near Lake Merritt, 5 initially run by Frank Rosso beginning c.1882. Rosso filed for insolvency in 1884, and died later that year. 9,10 It was later called Lake View Cottage. The cottage was an expansion of an earlier restaurant, Bellevue du Lac; Rendez-vous de Chasse run by Charles Blaise until the early 1880s. The building was originally closer to Oak Street, but was moved in 1888 when the land was sold. 3

By 1892, Augusta Dupont had taken over, and called it Lake View Cottage. 13 Dupont operated it as an inn, restaurant and saloon through December 1896, though the Rosso's Cottage name was still frequently used to refer to it.

In 1898, the city wanted to put Fallon St. through, which would require removing the cottage, 12 or at least part of the grounds. 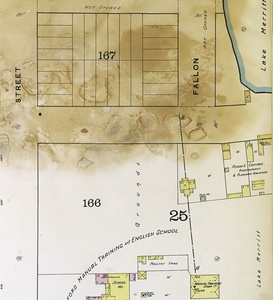 The resort as shown sat on pilings (?) over San Antonio Creek on the south edge of the 12th Street Dam. The retouching of the badly mottled original photo was accomplished by graphic artists at the Oakland Tribune prior to the publication of the image in 1952. 2

Frank Rosso was born in France in 1844. He served as a captain in Regiment A of the 55th N.Y. Infantry during the Civil War, and following his death on August 27, 1884, was buried in the Grand Army of the Revolution plot in Mountain View Cemetery. 10