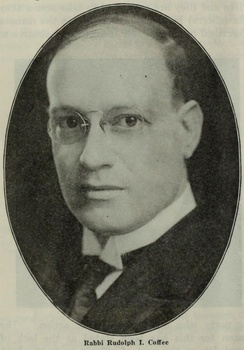 Coffee was also heavily involved in the efforts to establish Sequoia Park, which is now part of Joaquin Miller Park. He served as chairman of the "Save Oakland's Sequoias" (S.O.S.) campaign. In 1922 he was quoted in the Oakland Tribune:

"Look into the future fifty years hence and realize that Oakland will then be a city of a million souls, and you will find an obligation to your chlidren and your grandchildren, and obligation to vote for the 'Sequoia' Mountain park" 3

In 1925, he was appointed chaplain of the California Assembly, the first rabbi chosen as a chaplain for a state legislature. 11,12 He also served as a chaplain at San Quentin, Folsom, and Alcatraz. 1

Coffee was a charter member of the Human Betterment Foundation, an American eugenics organization in Pasadena, which advocated forced sterilizations, 'in order to keep what they diagnosed as a hereditary “mental disease” from being “transmitted to descendents.”' 6 This may be some of the other factors alluded to in "By 1933, though, the Great Depression and other factors led to Rabbi Coffee's resignation." 7 Coffee had also drawn the ire of some in the congregation when he publicly voice his opposition to amendments to the city charter. The board of directors said he was free to express himself as a private citizen. 9,10

Coffee was born July 24, 1878 in Oakland, to Michael Coffee and Rosa Abrahamson (Coffee), the oldest of 5 children.

His obituary notes that he was a high school classmate of Jack London, class of 1896. 4 He received a B.A. from Columbia University in 1900, was ordained in the Jewish Theological Seminary in 1904, and received a Ph.D. from the University of Pittsburgh in 1908. 1