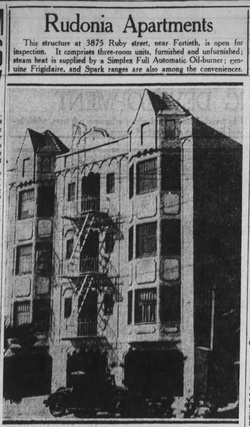 Rudonia Apartments is an interesting-looking building at 3875 Ruby St. dating back to 1929. Elmer Frederick was the first owner, and K.C. Stevens the builder. Iris McClurg was the live-in manager. 1

By 1934, they were known as the Acacia Apartments.

Forrest Shaklee, founder of the Shaklee Corporation, lived there c.1941.