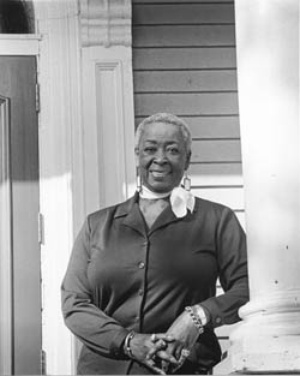 Beckford was the first African American dancer in several well known companies. In 1947, she founded a recreational modern dance department at the Department of Parks and Recreation in Oakland: the first in the United States. She was also a founder of the Oakland Dance Association. She taught at the Katherine Dunham school in New York and served on the dance panel for the NEA. Beckford has acted in the Oakland Ensemble Theatre and acted in several movies. 3

Beckford was the author of a biography on legendary dancer Katherine Dunham. She was co-author of a book on photographer E.F. Joseph.

Ruth Beckford taught Afro-Haitian dance to LaVerne Williams, who turned out to be Huey Newton's girlfriend, and she became interested in the Black Panther Party. Ruth Beckford coordinated the Free Breakfast for Children Program run by the Black Panthers. The first breakfasts were given out in 1969 in St Augustine's Episcopal Church in West Oakland. The first day the program served 11 kids, and by the end of the week it was serving 135 every day. 2