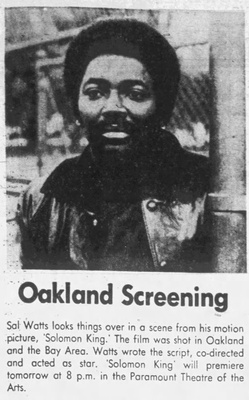 Watts was born in 1940 in Canton, Mississippi, to Eddie Watts and Emily Showers (Watts), one of 10 children. After serving in the U.S. Army from 1958 to 1962 (honorable discharge due to an injury, which resulted in the loss of a kidney), his older brother Herman took care of him while he recuperated. His was joined in California by his first wife Marion and their children.

Still trying to find out dates and locations of everything, but Watts had the following businesses:

According to Discogs, Watts moved on from Sal/Wa Records and managed Marsel Records (possibly named for one of his daughters). 2