San Antonio Creek is the historical name of the coastal inlet that includes the Oakland Estuary (as far as the Tidal Canal) and Lake Merritt. The 1857 Bache map depicts the bathymetry and surface material of this body of water. 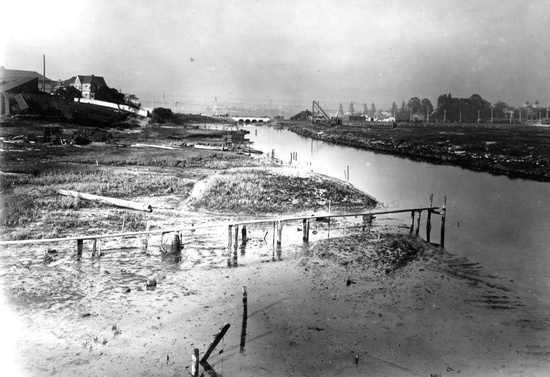 The photograph above depicts construction equipment in use making land along San Antonio Creek (Lake Merritt Channel) below the 12th Street Dam for the creation of Peralta Park and construction of the Oakland Auditorium. The reinforced concrete gates in current use to regulate tidal flow through the 12th Street Dam are visible in the distance to the north. [Question: Were the concrete gates rebuilt with the new construction which was just recently completed? - No. The channel has been partly reopened, as far as 10th Street. There's another bunch of concrete to remove there (as well as the remains of the Oakland Acorn's tunnel from Peralta Playland. See 12th Street Project Update, and note the updated shoreline in Google Maps. ]