Construction began on the bridge in 1933. Things were kicked off with a formal ground-breaking ceremony on July 9th, 1933. The bridge opened 3.5 years later on November 12th, 1936.

The bridge was originally configured with two-way automobile traffic on the upper deck, and truck and Key System trains on the lower deck.

See the Bay Bridge Info site for videos of the groundbreaking and construction.

The western span is a suspension bridge. It is officially known as the Willie L. Brown Jr. Bridge, but nobody calls it that. There are efforts afoot to rename the entire bridge for local character Emperor Norton, who made numerous decrees that such a bridge should be built back in the 1800s. 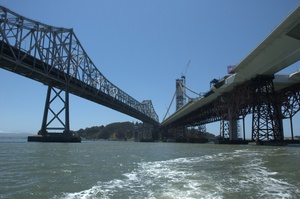 original on left, new span under construction on right
CC SA-BY Our Oakland

The eastern span was originally built as a cantilever bridge. A section collapsed during the 1989 Loma Prieta earthquake, and the bridge was closed for a month. It was determined that the eastern span would not with survive a larger quake, and work began on designing a new one. Various designs were considered, but ultimately they decided on a self-anchor suspension bridge.

Work on the new span finally began in 2002, and the new span opened September 2, 2013. The new bridge includes a bicycle and pedestrian path.

After the opening of the new bridge, work began on the deconstruction and demolition of the original eastern span. That work is expected to be complete in 2018.

Governor Jerry Brown gave the above Media Scrum on Love Our Lake Day, Sunday June 9, 2013, regarding Safety in the Construction of the Eastern Span.

If you want to stay up to date, the SF Bay Bridge hasan active twitter account where it discusses bridge-related news and updates with the public and otherbay area landmarks,civic infrastructure,naturalphenomena, andgeologic features.