Sanford's Restaurant was a restaurant in Montclair Village at 2062 Mountain Blvd. First opened as Klee's Smorgasboard, it was remodeled and opened as Flagg's Restaurant, then sold in 1953 to Sanford Cohn to become Sanford's. Later, the location was home to the Equinox. 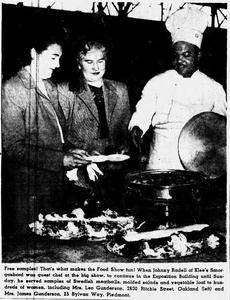 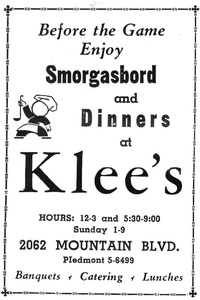 In 1951, the restaurant was purchased by A. J. Flagg and John S. Flagg, who already owned Pland's Restaurant. A. J. spent considerable time and money remodeling the restaurant before opening it in March 1952. Joe Kiklas was manager, and famed maitre d'hotel, Jerome DeFelice was host. 3

There was push back about granting them a liquor license. Some residents had long been fighting having any bars in Montclair, and it was noted the location was 150 feet from one church (?) and 825 feet from another (newly built Montclair Methodist Church.) But it was also noted that less than 10% of the floor space of the restaurant would be devoted to the bar, and ultimately the license was approved. 5

Bob Hecock became manager of Flagg's in September 1952 and his chef was...George Washington. 2 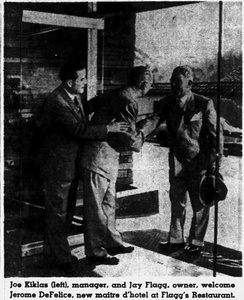 In 1953, the restaurant was sold to Sanford Cohn, who had previously managed the Athenian-Nile Club. 4 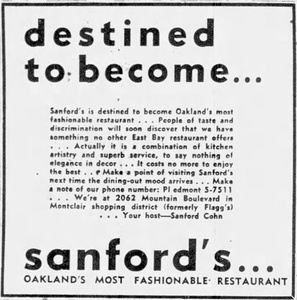