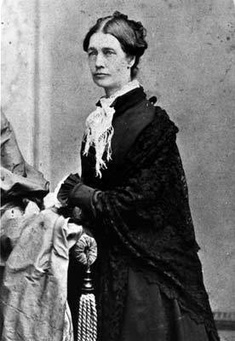 Sara Allen Plummer Lemmon (September 3, 1836 – January 15, 1923) was a botanist who worked to get the California poppy named the state flower. Mount Lemmon near Tuscon, AZ is named for her, as the first white woman to ascend to the peak. She also founded the first public library in Santa Barbara.

Sara was born in Maine in 1836, and taught in New York. She first came to California for her health, settling in Santa Barbara in 1869. She met John Gill Lemmon (1832-1908) when he was lecturing in Santa Barbara in 1876 and they married in 1880. They honeymooned in Arizona in 1881, and Sara became the first white woman to ascend the mountain that now bears her name.

After moving to Oakland, the Lemmons lived at 5985 (later 5979) Telegraph Avenue, where they developed the Lemmon Herbarium. The herbarium was eventually donated to U.C. Berkeley and became part of the University and Jepson Herbaria.

Lemmon worked in the field alongside her husband and documented a number of new species. As well as authoring her own works, she drew illustrations for her husband's work. In 1888 John was appointed a botanist and Sara as an artist for the California State Board of Forestry.

John died in 1908 and Sara in 1923, and they are both buried in Mountain View Cemetery. Their grave marker reads "Partners in botany, the California poppy was named the state flower in 1903 due to the persistent efforts of Sara Lemmon," and naturally, is adorned with poppies. In October of 1915, Mrs. Lemmon was found sweeping the street near her house, and was briefly arrested before being rescued by Mrs. Isaac Requa and taken to the King's Daughters Home. 4 The house was advertised for rent beginning in July of 1916, so it does appear that Mrs. Lemmon did not live at the house after this time. 5 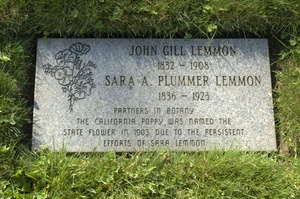 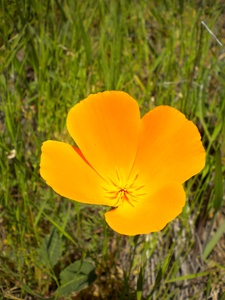 California poppy
photo from Our Oakland 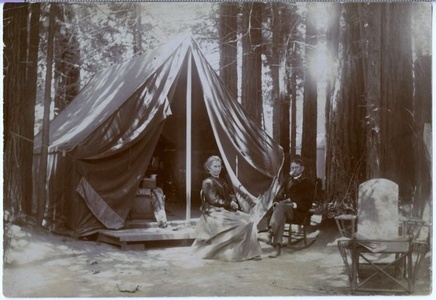 Sara Plummer Lemmon & husband John Gill Lemmon camping during their honeymoon on the mountainside that would later be named "Mt. Lemmon" in Sara's honor. 3 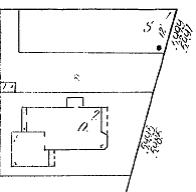 Based on a review of Sanborn maps, it appears that the Lemmons' house, which had an address of 5985 Telegraph Avenue, and which was in use circa 1950 as the University Baptist Church, is still in existence. Note also that in or about 1932, a windmill that was built as a lemonade stand was constructed immediately adjacent to the house, and this windmill is also still in this location. The property, which is now identified as 5977-5981 Telegraph, is now owned by the Steele family, owners of Steele's Discount Scuba shop next door. The Oakland Magazine article says it's no longer in existence, but that may refer to the herbarium. 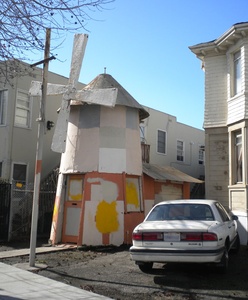 windmill
photo from Our Oakland