from 1896 Illustrated Directory of Oakland

The Sather Block was a row of half timber-style buildings with apartments and ground-level retail. It dated back to at least 1893, and was around until 1963. The building was also home to the Sather Hotel. [ years? at least 1913 to <1963 ] It was scheduled to be demolished for the Acorn housing project when it was damaged by the second of two major fires in 1963. 2,3

There was also a Sather Building on Washington near 14th, adjacent to Wilson House.

Referring to the Sather Block at Myrtle dates back to at least 1889, when it was proposed as a possible location for a park. 5 In 1893, R. Rademann opened a grocery store there. 6 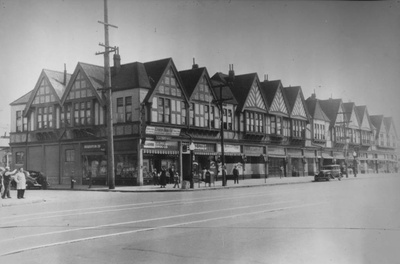 In 1924, Louise Phillips and Peter Madsen were married in the lobby of the Sather Hotel by Rev. C. Arthur Johnson. 4