KEEP THE RAIDERS, A’S AND WARRIORS IN OAKLAND

SAVE OAKLAND SPORTS is a grassroots group whose goal is to develop a game plan to convince the Oakland Raiders, Oakland A’s and Golden State Warriors to stay and build world-class stadiums in Oakland for the benefit of fans, their franchises, the economy and the entire East Bay.

In March they hosted an event with Deanna Santana and Fred Blackwell that was livestreamed online by A's Fan Radio that discussed the future of the local teams. 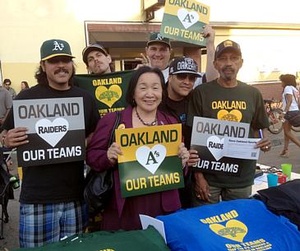 Jean Quan at the SOS booth at First Friday, via Quan's Newsletter