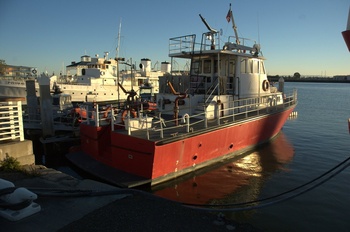 The Sea-Wolf was built in 1992 in Pascagoula, Mississippi. After serving only 9 years, in 2003 it became the victim of the city budget, and it was removed from active service.

It was called into service the night of October 7, 2010, when Tiki Tom's along the estuary burned. There was limited access to the building from the land side, so the incident commander wondered about the fireboat. Fortunately, Lt. Scott Hellige, the last of the Sea-Wolf's crew still on duty, happened to be at the fire. They drove to Station 2, and after some tests, the ship headed down the estuary. The fire was knocked down in 5 minutes after the Sea-Wolf arrived. 1

The Sea-Wolf is named for Jack London's novel, The Sea Wolf.

In 2021, the fire department received a FEMA grant to support the purchase of a new fireboat. 2