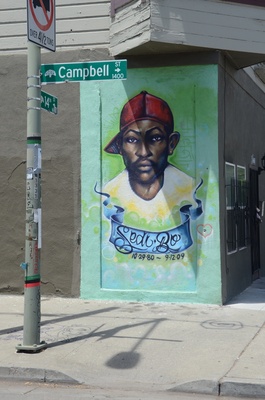 The Sedi Bo mural is a memorial to Cedric "Sedi" Bo (October 29, 1980 – September 12, 2009) at the corner of Campbell and 14th Streets in West Oakland. The mural is by Refa One. Bo was a musical artist who grew up in West Oakland. He was shot and killed during an attempted robbery.

There was a story about the mural on Ayodele Nzinga's blog, republished on Oakland Local.