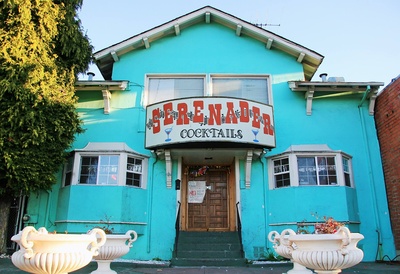 The Serenader Bar was a long-time bar 504 Lake Park Avenue. The location is now the Heart and Dagger Saloon. It had a long line of owners, but probably the best remembered and the longest time owner was Bernice Silveira, who owned it with her husband beginning in 1974 and managed it until her retirement in 2004. 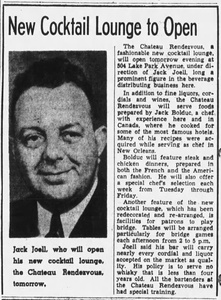 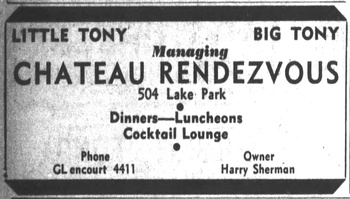 1940 adIn July 1940, Joe Luke and Jimmie Morehouse re-opened it as The Serenader. 2 Continuing the tradition, it seems like they didn't own it long, either. A 1942 crime article describes a break-in, and lists Fred W. Cook as the proprietor. 3

A serious fire in 1948 destroyed the upstairs rooms and the roof. The article lists Cliff Coakley of 551 Valle Vista Ave. and Thomas Huohy of Orinda as the owners. 4

Around 1952, brothers Charles Cradduck 8 and Herbert Cradduck owned it. Unfortunately, Charles died suddenly in May 1952, at age 39. 5 (One of Herb Cradduck's sons started Colonial Donuts in 1959.)

1956 brought another fire, this time apparently started from the water heater. It did an estimated $5,000 damage to rooms at the rear of the building. 6 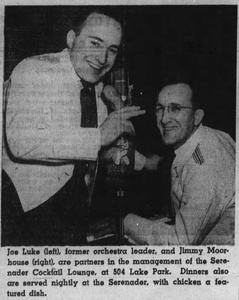 In 1974, Bernice Silveira, her husband Richard “Dick” Silveira, and Bernice's father bought the Serenader. They ran it together until 1986, when her husband died. Bernice was the only child of Esthyr “Honey” Stanislaus and James “Jimmie” Stanislaus, one of Oakland’s first black firefighters. 7

Bernice continued to run it until her retirement in 2004. 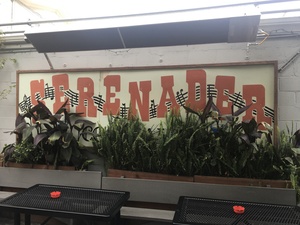 old sign lives on in beer garden
CC SA-BY Our OaklandIn 2004, it was purchased by the owners of the adjacent Kwik Way Drive-In, Alex and Charles Hahn, in order to expand the footprint of a proposed mixed-used development. The development was subsequently canceled. It grew somewhat run-down, and closed in 2009. In 2010, it was sold to Erik and Allison Sagauskas, who remodeled it and re-opened it as Heart and Dagger Saloon.