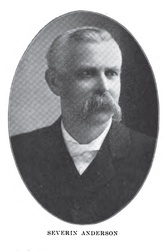 The Lutheran Church and California - 1916

Mr. Anderson was born at Tonsberg, Norway, November 28, 1848.  His father was a sea-captain.  His mother died in his tender years, so whilst very young Severin was compelled to leave school and go to sea with his father.  They sailed for about ten years, visiting almost every port in the world, but at the solicitation of his brother, Julius, he came to California and in the seventies arrived in San Francisco.  Variously employed for several years.  Secured a position in a carpet store.  This became the turning-point in his life, now learning the business he pursued to the end of his days.  His conscientious work earned for him the favor of the firm.  Beginning at the lowest rung of the ladder he soon found himself at the top.  In March, 1891, Severin started a carpet business of his own in the city of Oakland.  Mr. Anderson was always seen at the head, never trailing behind.  So in business.  Only the populous center of a big city would satisfy Mr. Anderson’s ambition as to business location.  Hence in the course of years the S. Anderson firm had been seen in Washington, Broadway and Thirteenth streets, where the masses surge from morning till night in the ever-growing community of Oakland.

Christmas eve, 1876, Mr. Anderson married Fredericka Hedemark.  The wedding ceremony took place at Our Savior’s Scandinavian Evangelical Lutheran Church of San Francisco.  Rev. Lauritz Carlsen officiating.  In church the young couple began their married life by asking God’s blessing upon their union; in church they continued until God in His wisdom dissolved the union.  While residing in San Francisco in the days of Reverends Hvistendahl, Carlsen and Groensberg they were members of Our Savior’s Church.  After moving to Oakland they became staunch supporters of Rev. I. L. P. Dietrichson in his efforts to establish a Scandinavian Lutheran congregation.  Children had now been born to Mr. and Mrs. Anderson.  Experience had taught how difficult it is to preserve the children’s interest in the church with a foreign language as the medium of speech.  Therefore it became a vital purpose in Anderson’s life to establish an English Lutheran Church in Oakland.  The realization of this purpose was made possible, when, in the summer of 1897, the Synod of the Norwegian Evangelical Lutheran Church of America decided to take up English Lutheran missionary work in Oakland.  Rev. E. M. Stensrud, residing in San Francisco, was sent as missionary to the place.  He started the work in July of the same year.  A steady growth was experienced.  The Lord blessed the untiring efforts of a few members who, together with the pastor, were determined to succeed.  Among them Mr. Anderson was a leader.  St. Paul’s English Evangelical Lutheran Church was organized November 3, 1897.  St. Paul’s Church enjoys the distinction of being the first distinctively English Lutheran Church of the Norwegian Synod.

Five children were born to Mr. and Mrs. Anderson:  Harry S., Ella C., Cornelia F., Frederick N., and Herbert J.  Harry and Fred now running the father’s extensive business; his daughter Ella married to Dr. Louis Graham, a prominent San Francisco dentist; Herbert is a wholesale coal merchant; Cornelia, the widowed mother’s home companion and comfort.  Mr. and Mrs. Anderson’s children reflect honor upon their parents.  They have proven to be chips off the old block.  Cornelia’s work in the church from her earliest teens as organist, leader of the choir, and Sunday-school teacher deserves special mention.  The eldest son, Harry, has risen to great prominence in the political life of Oakland, at present holding the position of Commissioner of Public Works.

The influence of a good man is felt beyond the immediate circle of the community in which he lives.  It endures beyond the limits of the earthly life.  Like rings forming upon the placid waters, it goes on and on, until it reaches the shore – eternity.  This may be said of Mr. Anderson.  His influence as a Christian gentleman, as a loyal citizen, as a loving father and tender husband, and as a faithful churchman, will never die. 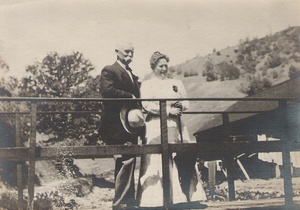 Severin Anderson, born Andreas Severin Nilsen, was born in one of the oldest towns in Norway, Tønsberg, on November 28, 1848.  His father was Niels Andreas Johansen and his mother was Elen Severine Jensdatter Miller.  Niels and Elen were married on January 29, 1839, one month after giving birth to their first son, Jens Julius Nilsen, on December 16, 1838.  They would go on to having eight children in Tønsberg, 5 children died very young and only 4 would see the shores of America, Julius, Severin, Elise, and Charles.  Elise Nilsen, Severin's only sister, was born November 1, 1854.  Nine days later on November 10, 1854, Elen died from complications of childbirth with Elise.  Severin was only 5 years of age when his mother died.

Severin's father Niels would re-marry again on November 9, 1856 to Gunhild Knudsen.  Niels and Gunhild had 2 children together, Charles August and Johan Mauritz.  Severin's brother Julius moved to Sweeden in 1863 and had ambitions to move to the US with his family.  Once there, Julius convinced Severin to move to the US to find work.  In 1868, Severin sailed to San Francisco to start a new life.  Elise and Charles soon followed Severin to America.  On October 12, 1869, Severin's father Niels died.

Severin began working for a man named Nelse Nelson, a Danish cigar maker in San Francisco.  Severin's sister Elise married Nelse and they would have 3 children, Louise, William, and Arthur Nelson.  Severin found a young lady in San Francisco named Fredericka Hedemark.  Her family was also from Norway.  Her parents were from Pacheco, California.  Her father, Cornelius Hedemark, died in Pacheco on December 7, 1875.  One year later, on December 24, 1876, Severin and Fredericka married in San Francisco.  On September 3, 1877, they gave birth to their first son, Harry S. Anderson, in Oakland.  They would have 4 more children together, Ella, Frederick, Cornelia, and Herbert.

Severin started his carpet store, S. Anderson Carpets in Oakland, in 1891 with his son Harry.  There he continued working until his death on May 10, 1913. 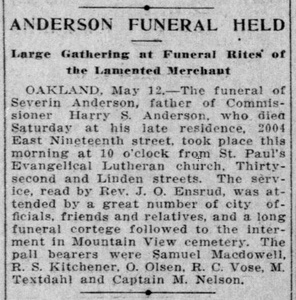 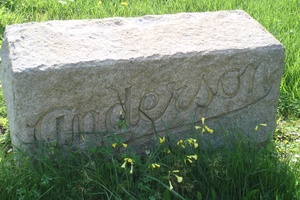