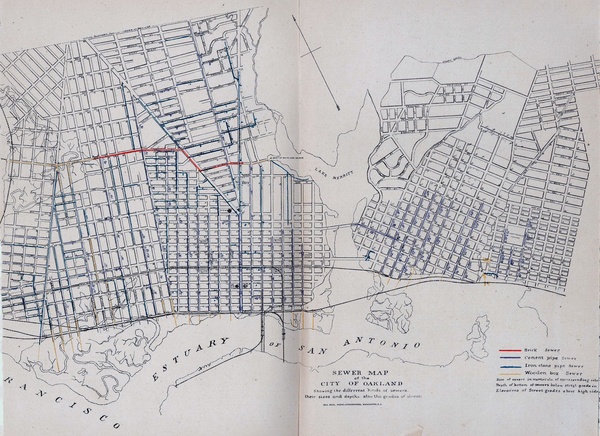 Sewer Map of the City of Oakland, showing their sizes and depths, also the grades of streets. (1880) 1

Vitally important, even if most folks would rather not consider sewers just as long as they work, this entry is devoted to the Sewers of Oakland history.

The Oakland City Engineers report of 1883 showed that "there are thirty eight miles of sewers in the streets of Oakland excepting main lake sewer which is two and one mileslong and that there are fifty one and one half miles of macadamized streets Last year the property owners paid for sewers and grading and macadamizing $254,140 which itemized shows that twenty four thousand feet of sewer pipe was laid or about four and one half miles costing $24,140."  4

In 1897 city officials thought dumping all the garbage and sewage for Oakland residents into the Bay would "solve the problem in a scientific manner for all time, and, if properly handled, will net the city a neat annual income, instead of being an expense to householders as its disposal at present it." 3

"The city has a complete sewer system, the sewerage being carried into the bay by natural drainage.  The sewers consume many times over the quantity of garbage the city daily produces." 3